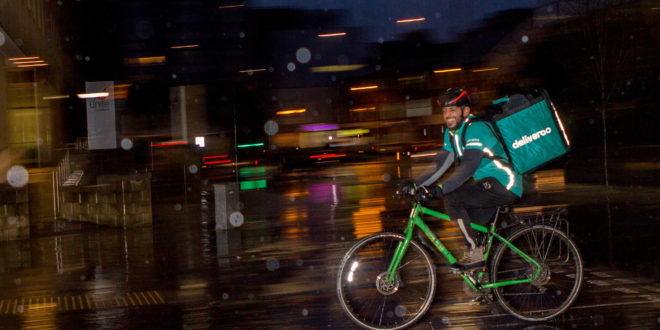 Deliveroo has delivered desire-line data from its app to show the mayors of London and the West Midlands where its gig-economy riders are choosing to cycle.

The food delivery company has mapped the routes taken most frequently by its riders on the roads of London and Birmingham and shared them with the respective mayoral teams. The three million data points provide detail on which cycle routes are used most often by riders, and where future cycle lanes might be beneficial given the volume of riders who use those routes.

63 percent of Deliveroo riders would like more cycleways, said the company, which has 10,000 cyclists around the UK on its books.

"We’re working hard to improve cycling provision and safety right across London as we invest record sums in new cycle superhighways and quietways – this includes constantly looking ahead to develop the next generation of routes so we welcome this data from Deliveroo riders who travel across so much of the capital every day."

"We want to have more cyclists on the road and we welcome this invaluable support and feedback from Deliveroo riders who know our roads so well."

"Rider safety is of paramount importance to us, so we’re really pleased to be sharing these data maps with the mayors of the UK’s two largest cities.

"Riders enjoy the health benefits of working outside, but have told us that they’d like to see greater investment in cycle lanes to make them feel safer out on the road.

"We hope these initiatives will help both riders and the wider community cycle safely around their city."

In a Bike Blog piece for The Guardian, I revealed that, after business hours, I ride for Deliveroo. It’s a great way to get fit, I wrote, it’s the gym that pays you. I like getting out there exploring my home city in all-weathers and now three times a week I’ll spend three hours riding my bike when otherwise I’d just be twiddling with Twitter.

In London, the top 10 busiest roads for Deliveroo riding are:

In Birmingham, the top 5 busiest roads are: