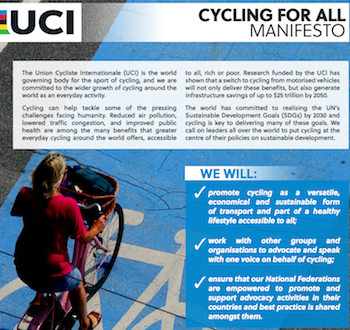 The Union Cycliste Internationale is to widen its remit to advocate for all forms of cycling, including transport cycling. This move from the world governing body for cycle sport has been welcomed by British Cycling’s policy advisor Chris Boardman: “Whilst cycle racing is a marvellous sport and provides some of the world’s most exciting events, the bicycle itself has the potential to be so much more than entertainment; in truth, it could be world changing."

"If more people used [bicycles] for everyday tasks it would have an enormous impact on reducing global pollution levels and improving health. There are nations and cities that do just this but those examples are still the minority. Often, other, more car-oriented cities aren’t even aware of the benefits of more cycling, in large part because no one is responsible for publicising the bicycle’s potential and spreading the word.

“I am delighted the Union Cycliste Internationale has decided to widen its remit and champion this amazing machine in all its forms around the globe. It is the ideal body to bring people together and share best practice, unify lobbying activities and to persuade world leaders that two-wheeled transport should be part of their cities’ transport future.”

The UCI has published a Cycling for All Manifesto, which sets out the ambition, role and core activities the organisation will pursue to support cycling in all forms across the world.

The manifesto argues that cycling advocacy is being embedded into all areas of UCI activity, ensuring the organisation is a leading advocate for everyday cycling, working with partners from grassroots through to high level political engagement.

UCI president Brian Cookson said: “The manifesto provides a vital link between the sport of cycling and the much wider activity of everyday cycling that takes place in people’s daily lives.

“We want to create a more bike-friendly world, where higher rates of cycling deliver a whole range of wider benefits, from health to environmental. Across the world, far too often it is a challenge for people to choose cycling as a form of transport, be it riding to work, travelling to school, or transporting goods to the market by bike. The UCI wants to make journeys by bike safer and more accessible for all."

He added: "We encourage our national federations and continental confederations, the cycling advocacy community, the cycling industry, and political leaders across the world to work with us in this essential area.”

At the political level, the UCI wants to engage with policy makers to encourage countries and international organisations to adopt bike-friendly policy. For example, the UCI is working directly in Brussels to influence EU decision-making, ensuring that the European institutions are supporting cycling, and looking to the bicycle to achieve EU policy goals.

And just as the UCI has stickers for rule-compliant frames and cycle components it will provide the UCI Bike City label to cities that invest in elite cycling as well as everyday cycling activities. The UCI is also developing a UCI Cycling for All Ambassadors programme to work with professional riders on cycling advocacy campaigns.