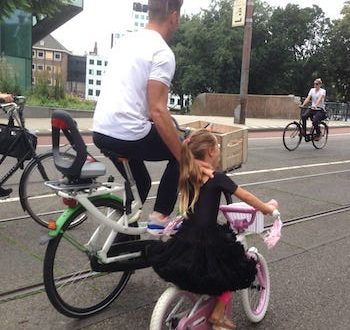 Bicycle sales in the Netherlands drop to a thirty-year low

The mainstream Dutch press is expressing surprise over a decline in new cycle sales in the Netherlands. This follows a press release from the RAI industry association, which along with BOVAG and research company GfK measures sales and use of cars, bicycles and other forms of transport in the Netherlands.

Looking on the bright side, the average sale price of a new bicycle has topped €1,000 for the first time. This is due to the success of e-bike sales in the Netherlands. E-bikes now account for 30 percent of the Dutch market, but nearly sixty percent of its revenue. (The average price of a bicycle in the UK is just €345.) E-bike sales – 276,000 were sold in 2016 in the Netherlands – now appear to be static.

"In the past 30 years [the Netherlands] has not sold so few new bikes," said the RAI/BOVAG/GfK report.

"Use of bicycles for commuting [has been] insufficiently stimulated," say the organisations, and to stimulate demand they have urged the Dutch government to introduce tax-breaks for bicycle purchases.