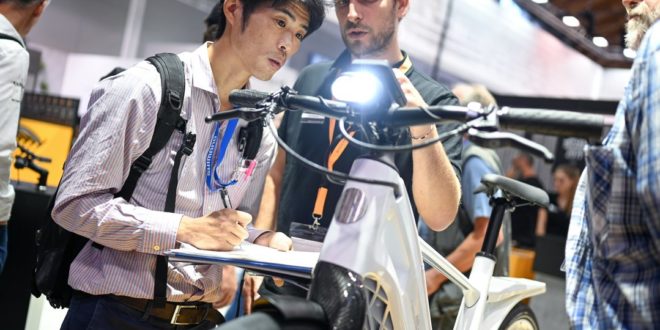 Cycling world gears up for 2020

Eurobike opened its doors to trade visitors on Wednesday, 4th September and the bike world is focusing on next year’s models.

“Looking at the new innovations, there are a lot of really exciting developments,” said head of Eurobike, Stefan Reisinger.

Urban bikes: understatement and power
Urban bikes are a personal statement and an expression of attitude. This is something clearly recognised by bike manufacturer Coboc (Hall A6-306). They match understated designs with impressive technical performance. Coboc is presenting a new approach at Eurobike with the “Seven Kallio”. The new bike is the Heidelberg-based manufacturer’s first step-through model.

When it comes to meeting high technical specification requirements, Riese & Müller (Hall A6-300) is launching its “Delite” and “Superdelite” model families to hit the streets. Users can choose from numerous chassis options to best meet their intended area of use. The Darmstadt company is also showing what is possible with its “Superdelite GT Rohloff”. The S-Pedelec has a fully-integrated dual battery, 140 mm suspension forks and is equipped with optional ABS.

Although not quite series production-ready, Kettler (Hall A6-302) is launching its cargo bike with a distinctive technical design at Eurobike. Instead of classic construction with a steerable front fork, it has hub steering. As a result, this bike benefits from a particularly straight line and certain other construction advantages.

E-mountain bikes: an electrifying segment
E-mountain bikes are without exaggeration probably the most electrifying segment on the bike market – in terms of technical development and market relevance. Take, for example, the new “Rapcon Pmax” from Simplon (Hall A3-100). The bike experts from Vorarlberg are demonstrating the limits of what is currently possible with e-MTBs. It has a Bosch “Performance-CX Drive”, whose battery capacity can be extended to 1125 Wh with an optional battery, carbon frame, variable geometry, variable wheel sizes, steel spring shocks and customisable spec options.

A further spectacular Eurobike première is the young Croatian bike manufacturer Greyp (Hall A1-502), whose new model “G6” is a rolling social media e-MTB machine. With its integrated action cams front and back, Greyp not only documents bike adventures, but also shares them by the bike’s GSM connectivity with social platforms – augmented by data from a range of sensors.

Top technical performance and a clever distribution strategy – new brand Swype (Hall B1-201) is premièring at Eurobike. Behind the company is renowned German bike manufacturer Cycle Union, who promises that the full Swype programme will be readily available to specialist retail partners. Long waits and delivery delays for dream bikes to arrive, as often experienced by customers in the e-MTB sector, should, therefore, be a thing of the past.

In addition, kids are also discovering the advantages of e-MTBs for themselves. Whereas in the past, they might not have been able to keep up with their parents, e-MTBs have the power to boost performance so that kids can finally ride at the same pace, including in more demanding terrain. Kid’s bike experts Woom (Hall A3-102) show what just such a solution might look like.

E-road bikes: the next big thing?
With e-MTBs, the search for the ideal drive is answered for the coming model year with mid-drive motors and integrated or semi-integrated batteries. However, when it comes to the road bike segment, the jury is still out. Currently, e-road bikes feature a relatively mixed bag of very different drive concepts. At the head of the peloton are Ebikemotion and Fazua – two pioneers of the e-road bike segment.

Ebikemotion, the originally Spanish designed drives now owned by Stuttgart-based integrated systems provider Mahle (Hall A1-500), are on show at the Eurobike with the Italian road bike specialists Wilier Triestina (Hall B5-200). Their new “Cento 10 Hybrid” e-road bike not only boasts superb design, but also weighs just 10.2 kg – light enough to even make you forget that it is an e-bike

“Fazua” drive systems (Hall A1-205) are also leading the way with exciting new innovations. The young company from Ottobrunn near Munich is showcasing new solutions at Eurobike with remote Bluetooth control integrated discretely into the frame. Both e-road bike pioneers face serious future competition from Bosch, whose new generation of the “Performance CX” drive system is also aimed at road bikes. See, for example, the KTM booth (Hall A6-200). The latest version offers sustained support up to 25 km/h and a freewheel beyond that. This now makes the Bosch drive interesting for fast-moving road cyclists who only want motor support for mountain ascents.

E-drives – constant further development
Drive systems for e-bikes are developing at a rapid pace. Nearly all manufacturers are offering updated, improved or completely new motor systems for the coming season. Bafang, for example, presents an adaptable system for road, gravel and cyclocross bikes with the “M800” (Hall A1-304). The motor has a compact design that fits almost invisibly into a frame and also offers some special technical features. Once the upper support limit is reached, the motor switches into a virtually resistance-free mode.

Fans of complex e-technology that is user-friendly and easy to use will like the new Yamaha motors that feature an Automatic Support mode (visit, for example, R Raymon in Hall B2-400). Cyclists no longer have to select the right gear or support level for the next hill. Integrated sensors detect the riding situation and provide a corresponding level of support.