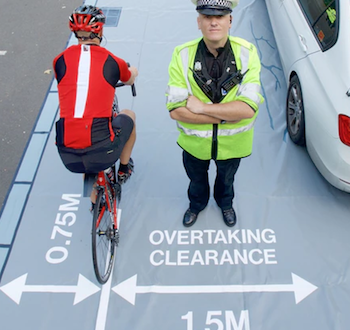 Cycling UK has launched a ‘Too Close For Comfort’ Kickstarter campaign to pay for 50 close-pass mats for distribution to police forces around the UK. These mats were developed by West Midlands Police to educate motorists on correct overtaking distance.

WMP sent plain clothes officers out on bikes, and pulled over drivers who overtook too closely. Using a ‘safe pass’ mat that cost over £800, WMP then demonstrated to these drivers how to overtake vulnerable road users safely, with the worst cases being reported for careless driving.

Driving behaviour in the local area changed overnight, with a 50 percent reduction in reported close pass offences in the first three months.

“Our police forces have been clobbered with years of cuts from central government. Hearing of the enthusiasm from several forces for West Midlands’ close pass operation, we thought we’d try and give them a little helping hand.

As rewards for backers, Cycling UK is offering products emblazoned with the close-pass design, including beer mats, mouse mats and, for £8000, a bike ride from Cycling UK’s own Matt Malinder. For £100 you could even have a WMP-style bath mat.