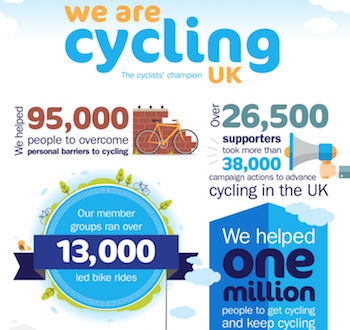 Cycling UK’s board of trustees meet tomorrow, and will vote in a new chair to replace David Cox. Cycling UK is the new name for the Cyclists’ Touring Club.

“Cycling UK has great ambitions for another exciting year after the success of 2016 and further building on David’s legacy. Under David’s watch, we have seen the organisation become a charity, rebrand its trading name to Cycling UK and help millions of new and returning cyclists get cycling via initiatives such as the Big Bike Revival, Bike Week and our campaigns such as Trails for Wales and Zerostars for Eurostar.”

Jim Brown, one of the candidates for position of chair, said the organisation needs to increase its membership base. "Our membership has declined continuously for the last five years," he said. "This is a serious failure."

"We must prioritise membership growth as a key performance indicator for our chief executive," said Brown, who has been a cycle campaigner for 30 years, a former vice chair of CTC Council and is a Stevenage-based borough councillor.

If elected, he said he will "not seek ways to disqualify people who disagree with me." This is a reference to behind-the-scenes disagreements between current and former officials and members that followed the name change to Cycling UK and the transformation into a charity.

"The recent drift to secrecy, confidentiality by default, is very disturbing," stated Brown.

"To see board and former board members being pursued by expensive disciplinary processes for allegedly being no more open and accountable than we took for granted only a few years ago is alarming."

He also said that more work should be done to "value" the organisation’s members.

"Somehow, we have developed a culture of treating many of our volunteer activists as a problem. Further proposals to degrade the status of membership should be dismissed forthwith."

Brown stressed: "The heart of Cycling UK lies in its members. All of them."

Trustees joining the Cycling UK board for their first meeting will be Dr. Janet Atherton, Rachel Kirkwood and the former MP for Cambridge Dr. Julian Huppert.