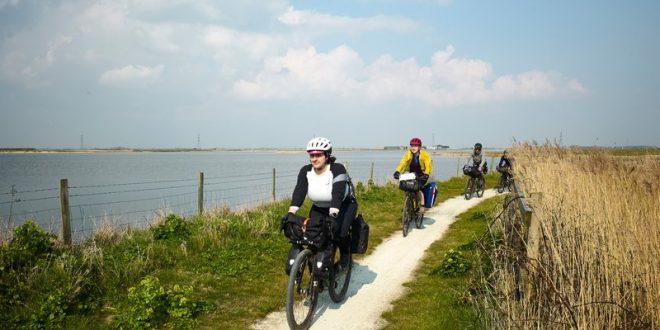 A group of cyclists rides past a lake near Lydd, Kent, on Cycling UK's Cantii Way route

Cycling UK has unveiled the latest addition to its ever-growing collection of long-distance cycling routes, this time in picturesque Kent.

The Cantii Way is a 145-mile (234km) course, made up of quiet ways, country lanes, and bridleways, that starts and finishes in the village of Wye, near Ashford, and is designed as an introduction to multi-day cycling.

Taking riders through Canterbury, Whitstable, Folkestone, Dover and Dungeness, the route has also been designed to regularly pass by train stations, making it easy to split up over several weekends.

Sophie Gordon, Cycling UK’s campaigns officer behind the creation of the Cantii Way said:  “The Cantii Way is a perfect introduction to the wonders of cycling around Kent, and is ideal for those looking to try cycle tourism for the first time. It’s not just great for beginners though, Kent is rich in history, rich in culture and rich in cuisine – it’s a perfect location for cycling, and the Cantii Way gives you the very best of the Garden of England.”

The route was launched on 26th May to coincide with annual celebration Kent Day, and to honour the Queen’s platinum jubilee this summer.

Cantii Way should be rideable by “anyone of reasonable fitness” on most types of bikes.

Gordon added: “Cycling UK wanted to leave a lasting legacy this Jubilee for our patron the Queen, that wouldn’t just be fun to ride, but would also bring real benefit to the local rural economy.”

“The people cycling through Kent’s network of paths and quiet ways will quite literally be fuelling themselves from the local shops, pubs and tea rooms they pass through, and many of these will be off the beaten track.”

The Cantii Way, named after an Iron Age Celtic tribe, is the fifth long-distance cycling route Cycling UK has launched since 2018.

A sixth route is on the way in Norfolk later this year.

Previous How can brands and retailers overcome the curse of content?
Next BikeExchange CEO resigns as company announces plans to raise capital