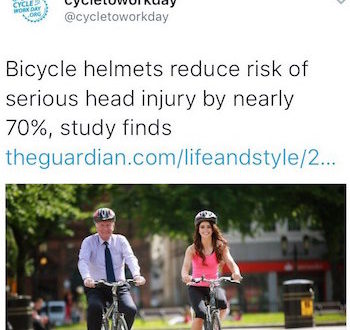 The photograph was first used in a Bike Week event in 2014 – it features two riders who are either wearing strapless helmets or who were photographed lidless with helmets added later by digital means.

Model Anna Henry and Andy Bready from Northern Ireland’s Department of Regional Development’s Cycling Unit were photographed in front of Belfast City Hall. Both of the helmets they were shown wearing were strapless, as revealed by BikeBiz at the time. Wearing strapless helmets led some to assume the helmets were digitally placed on Henry and Bready after the event.

BikeBiz called Bready at the time. He said he was wearing a helmet for the photoshoot. "We are obliged to wear helmets when riding bikes," he said.

Henry added: "I was wearing the helmet for the photo. I didnt do [up] the straps as it wasn’t very flattering."

Cycle to Work Day used the photograph on a tweet suggesting followers should read a Guardian article about helmet use. When Twitters users pointed out the BikeBiz story about the possible Photoshopping @cycletoworkday deleted the tweet.

A spokesperson for Cycle to Work Day told BikeBiz: "Our social media community informed us of that the image may be inauthentic as such we removed the post."