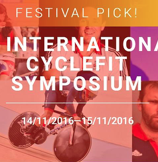 The International Cyclefit Symposium 2016 has been nominated for the Festival Pick award at Manchester European City of Science.

It was recently announced that Manchester received the accolade of being the 2016 European City of Science, due to the high level of academic achievement undertaken in the region. The year-long initiative promises "365 days of scientific wonder," which will highlight various events around the city.

The International Cyclefit Symposium has now revealed that it has been nominated for the renowned Festival Pick. The symposium, which takes place over two days in November, will occupy the Barnes Wallis Building in the campus of the University of Manchester, and will lead discussions on the subject of cycling biomechanics.

ICS16 is set to return after a two-year absence, and will feature talks by notable specialists including Glenn Hunter, Prof. Steve Peters and Greame Obree, who will discuss subjects such as "understanding the cyclists’ foot" and "data in sport, helpful or distraction?"

A representative from the conference commented: “We are incredibly excited to have such illustrious keynote speakers as Professor Steve Peters and Graeme Obree. In truth all the speakers this year have been selected because they will contribute on an academic, medical or practical level to our fit intelligence.

“Sometimes to move forward with a subject you have to move around it. And in the case of bike-fitting that means drawing from other worlds and subjects: podiatry, psychology, anatomy, medicine, academia, physiology, elite sports, to name a few.”

For more information on the event, visit the ICS 2016 website here.