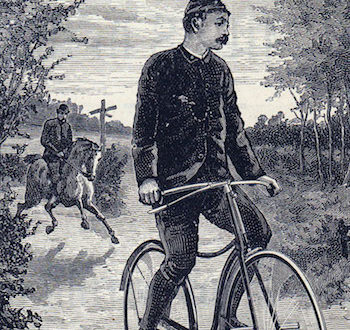 Creator of the modern bike celebrated in his home town

A museum exhibtion on J.K. Starley, creator in the 1880s of the modern bicycle, is to open in his birthplace of Walthamstow, London.

An exhibition celebrating his life and works will open tomorrow at the council-owned Vestry House Museum in Walthamstow.

The title of the exhibition – "No Ordinary Bicycle" – is a play on the fact that Starley – nephew of James Starley, "father of British cycling" and populariser of the High, or Ordinary, bicycle – created a bicycle with two equally sized wheels.

Starley lived on Church Hill, Walthamstow, until 1872 when he moved to Coventry to work with his uncle where he helped build Ariel high bicycles.

“The worldwide accessibility and popularity of cycling is due, in large part, to the work of JK Starley in the late 19th Century. His Rover Safety revolutionised not just the bicycle but the world. The billions of bicycles made since 1885 can trace their ancestry back to that original ground-breaking machine."

Italian bicycle manufacturer Ernesto Colnago said: “All modern-day bicycle designers owe a huge debt to JK Starley and his vision. Starley’s stroke of genius is an inspiration to us.”

Cycling UK’s Roger Geffen said: “Time and again when there are public votes to nominate the greatest British inventions, the bicycle is right up there at the top of the list. Starley’s invention still offers a solution for the sustainable future of our civilization.”

Mikael ‘Cyclechic’ Colville-Andersen, CEO of Copenhagenize Consulting, said: “I cannot think of any other invention in human history that has had such a major impact on such a broad spectrum of human beings than JK Starley’s bicycle design."

He added that Starley’s bicycle was "a truly visionary, society-changing invention and design that can simply not be improved."