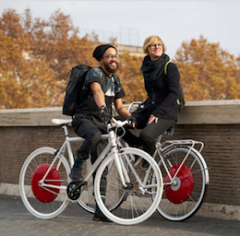 Transportation robotics company Superpedestrian has announced the availability of its Copenhagen Wheel in the UK and across Europe.

The Copenhagen Wheel, which was invented at the Massachusetts Institute of Technology, is a red hub that can be installed on any regular bike to adapt it into a basic e-bike. Each Copenhagen Wheel is built to order and is customizable at Superpedestrain’s new production facility in the Netherlands; the wheel will be available immediately to customers in Europe and the UK.

The wheel has been the subject of much controversy within the industry due to various delayed releases over a number of years, which caused many customers to cancel preorders.

Statements from the brand seemingly confirming a release date go back as far as 2015, with co-founder and CEO Assaf Biderman, telling BikeBiz at the time: "We’re ramping up, but slowly. It’s a complex product, and we care about quality. We have thousands of orders already placed. We’ll be back ordered for about six months. We’re selling direct not because we have anything against distributors; we’d love to work with partners, but we want to keep the price close to cost.”

A BikeBiz reader commented: "I just cancelled my pre-order; made December 2014 so it follows they would immediately start shipping! Seriously though, they have back orders of thousands of wheels, god knows when those orders will all be filled. In fairness to them they gave me my money back promptly."

Regardless of release controversy, the improved Copenhagen Wheel can be simply installed on almost any bike and includes a combination of sensors, computers, a battery and motor that respond faster than the body can detect – resulting in the sensation of being pulled forwards. When braking, the wheel captures energy and recharges the battery. Riders have the option of choosing how much boost they receive through a range of ride modes which are available in the wheel smartphone app.

The device will ship within five to seven days.