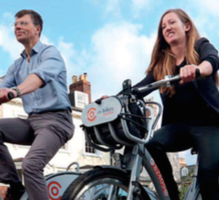 The brand, which also runs an electric car hire business, currently has five cycling hubs around Exeter, including one at the central train station, one at the university, and a hub at the Sowton park-and-ride.

Each hub currently holds between four and eight bikes, with a proposed three further docking stations on track to open by2017.

The bikes are powered by zero-carbon renewable energy produced from Good Energy, and are provided by bike share specialists Nextbike. In a recent interview, managing director Mark Hodgson commented: “After years of planning, we’re very excited to be launching in Exeter. The Co-bikes electric bikes are changing the way that people travel around the city. They are affordable and easy, as well as being great fun to ride.”

Co-bikes can be rented for as little as £0.75 per half hour for those with a membership, and a deposit of only £10 is required from all users. E-bikes can be rented by using the recently implemented mobile app, which locates available bikes with an allocated number or QR code.

The app also provides cycling routes via the integrated map system, and keeps a log of user activity.