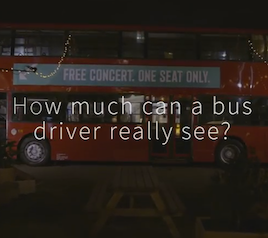 In a bid to raise the profile of fatalities incurred due to the blind-spots of large vehicles on London roads, the lighting brand recently hosted a concert in Copeland Park, Peckham. At the concert, the Hackney Colliery Band performed entirely in the blind spot of an average London bus.

The concert was filmed from the obscured perspective of the bus driver and can be viewed on the Blaze Youtube channel here.

Blaze co-founder Emily Brooke, commented: “The purpose of the video is twofold, firstly to highlight how big the blind-spot of these large vehicles are; you can fit an entire brass band in one! Secondly, it aims to show how a Laserlight makes a cyclist more visible to drivers ahead. It gives them a bigger footprint on the road and can make them seen when otherwise hidden.”

A study conducted by the Transport Research Laboratory in conjunction with Transport for London in 2016, found that blind-spot areas around vehicles, caused by the limitations of their body shape and mirrors, were significantly reduced by utilising bicycle lights such as the Laserlight. The light is currently being rolled out across 11,000 Santander bikes in London.