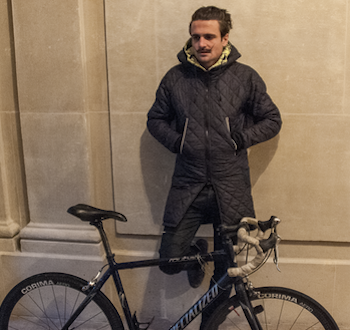 28-year-old Quentin Xavier is the aerospace engineer, and 26-year- old Henri de Kergorlay – with his waxed moustache – is the fashion designer. The pair have launched their first products on Kickstarter, but are planning on becoming a brand with wider availability, including to the bike trade.

The waterproof and breathable Banana Jacket will eventually retail for €140 but is available on Kickstarter for €85.

The padded Jongleur 5.0 jacket features a thigh-length cut and a hood. A front split allows for pedalling. Extended cuffs feature thumb holes to keep the jacket’s arms in place, and integrated thermal mittens.

There are four versions of this jacket, three of them reversible, starting at €109. The €149 version features LED turn signals and a touch-sensitive see-through pocket on the arm for storing and using a mobile device. The €195 version isn’t reversible but has elbow and forearm crash padding.

Urban Circus said it wants to hear from potential distributors.