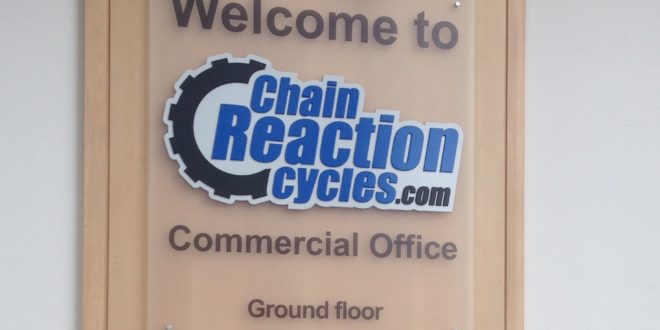 In 2016 BikeBiz broke the news that Wiggle was in talks to absorb its main rival Chain Reaction Cycles of Northern Ireland. A CRC manager has now told us that, at the time, "management stated there was no truth to the story, it was merely shoddy journalism and informed us that the two business[es] were NOT is discussions and a merger/taker over were NOT in the plans of either company."

This is just one of the incendiary claims in an email we received earlier today. CRC-Wiggle CEO Will Kernan has been asked to comment on the claims but so far nobody at the company has returned our emails or calls.

Wiggle was sold to Bridgepoint Capital in 2011 for £180 million, and still owns CRC-Wiggle.

The whistleblower says that jobs are at risk at the CRC sites in Northern Ireland and that upper management have shown "ineptitude" in how they are handling the situation.

"It seems Bridgepoint are on a mission to decimate Chain Reaction Cycles to the point where it can be justified in moving the remaining positions to the UK mainland."

I turn to you as a respected journalist within the cycling industry, one whom I have followed for many years. It is high time someone took a stand and shed some light on just what is happening within our once beloved industry.

My concerns revolve around the take-over primarily of Wiggle by Bridgepoint and subsequently Chain Reaction Cycles. One can claim the take-over was of course a merger, Chris Watson having sold his company to Bridgepoint and subsequently accepting a place on the board of directors. However, that is far from the current reality. Having worked within CRC for many years and witnessed the growth year on year I simply must raise a voice for the many, those still here and those sadly gone because of the ‘merger’.

You first broke the story of a proposed takeover in early 2016 and it was from the pages of BikeBiz that staff in CRC found out about the proposal. Management stated there was no truth to the story, it was merely shoddy journalism and informed us that the two business were NOT in discussions and a merger/taker over were NOT in the plans of either company. This untruth set the trend for what has been a two-year rollercoaster of lies and deceit.

When the staff were eventually told of the take-over we were then informed it would make absolutely no difference to the day to day running of CRC, all jobs would be safe. That was until the former CEO Stefan Barden announced a ‘town hall’ meeting and subsequently informed staff that all warehousing/stock (Whitepark – bikes/wheels being the exception) would be moved to Wolverhampton. This was a major shock as CRC could ship both locally (UK/Ireland) and internationally much more cost effectively than Wiggle. At no point during the initial take-over rumours or eventual take-over meetings did any of the Watsons make themselves available. Not one family member addressed staff, staff that had been unwavering in their loyalty for many years.

Over the next year (2017) warehouse redundancies were announced monthly. During that period a lot of non-warehouse staff raised concerns which lead to Wiggle/Bridgepoint sending a representative to address CRC staff. It was made clear that all other departments would have a long term future with the company, our wheel building facilities/skills were used as an example of how CRC would have an enduring footprint within Northern Ireland. Two months after the meetings it was confirmed all wheel builds would be re-located to Wolverhampton.

This was the pattern throughout 2017, department after department informed they no longer had a future with the company. At the end of 2017 the remaining staff/departments were moved to a new office in Mallusk. This led some to think there might be a bit of security, in the short term at least. However early in December our finance department were informed they would not be required after Christmas. Redundancies have continued each month of 2018.

In late January it was announced that shifts will be introduced to Customer Services (CRC), this has led to staff with family, single mothers/fathers and some of our older staff having their contacts terminated simply because they cannot work the proposed shift pattern. The shift pattern initially started as a 90-day consultation process but it was made clear to all staff that there was no alternative, either accept a new contact and work and shifts, if not your current contract would be terminated. We are watching good members of staff leave on a weekly basis and being replaced by short term contacted recruits of a much lesser standard. In effect, a disposable commodity. A shift change would be somewhat understandable if there was a legitimate business reason. We have been told it is to offer a world class service yet to due the ineptitude of management/directors we have seen company sales slump and subsequently contacts to Customer Service dwindle. Staff are currently sitting for five days a week with little to no work yet the proposed shift change would mean additional hours (10 hour days including weekends), more hours to do nothing.

And just this month it was announced that some CRC staff (B&M/customer service among this number) shall not be receiving a pay rise. It has been many years since we last received any sort of pay increase yet inflation rises year on year. It seems Bridgepoint are on a mission to decimate Chain Reaction Cycles to the point where it can be justified in moving the remaining positions to the UK mainland.