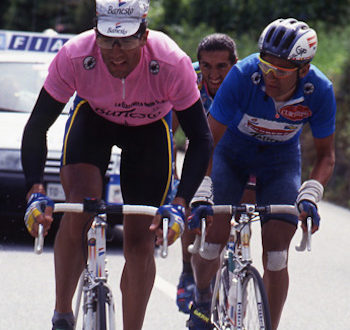 Castelli will be supplying the Maglia Rosa and the other Giro d’Italia classification jerseys for the next four years. The Venetian company – famous for its scorpion logo and a host of innovations over the years – has signed a deal with RCS Sport to produce the jerseys from the 2018 edition of the Grand Tour race.

Castelli is not new to the "Corsa Rosa": in the 1980s and 1990s, many champions wore Castelli-made jerseys. The last rider to wear a Maglia Rosa made by Castelli was Miguel Indurain, winner in Milan in 1992.

"This historic company will once again produce the Giro leader’s jerseys after our successful experience together in the 1980s and 90s. We are certain that this will be an important and worthwhile partnership for both companies, for marketing and in terms of return on investment,"

Castelli brand manager Steve Smith said: “We are really proud of having back the Scorpion on the roads of the Giro d’Italia. For an Italian company being partner of RCS Sport in ‘the toughest race in the world’s most beautiful place’ can only be a great joy. This is a great occasion to showcase an Italian company that’s synonymous with excellence in cycling clothing.”