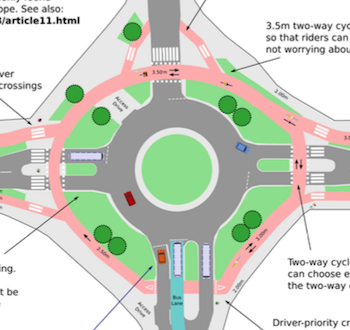 Cambridge votes for a “Do Optimum” Dutch-style roundabout

Design & Layout of Roads in Built-up Areas, a report produced for the Ministry of War Transport in 1946, recommended that cyclists should benefit from protection at roundabouts. The protection never came, even though cyclists in the Netherlands benefitted from such protection. But now the UK is closer to getting a full-on "Dutch-style" roundabout – it could be built in Cambridge after the Milton Road Local Liaison Forum last night voted in favour of the so-called "Do-Optimum" approach to a proposed road layout plan.

The proposal for the Milton Road scheme will go forward to the local authority. The design incorporates priority for walking, cycling and public transport, and includes features such as walking and cycling priority-crossings of minor side roads, cycle lanes separated from motor vehicles by trees within verges, a safe roundabout design that provides protection and priority for walking and cycling, bus stops designed to be fully accessible to persons with disabilities, and innovative bus "queue-jump" lanes that give buses a head-start at junctions.

This new proposal evolved out of the City Deal Local Liaison Forum workshops where groups of stakeholder residents and organisations were brought together by council officers to talk about the various elements of the City Deal scheme.

In their foreword to the resolution, the working group stated “This design offers a great opportunity for Cambridge to pioneer a welcoming, best-in-class, tree-lined gateway into the city that will transform the way people choose to travel, because it will provide a safe, calming and healthy environment for all modes of use. From the evidence of the workshops it is very likely to attract majority support from local stakeholders and we believe that it meets the City Deal objectives to a greater degree than the Do-Something proposals.”

Matthew Danish from Camcycle attended the workshops and said that, "the most important thing was working together with residents and the various stakeholders to produce a shared vision for a better, greener, safer street for people of all ages and abilities. Together, and with the endorsement of the Local Liaison Forum, we offer the Do-Optimum proposal to the City Deal Board in the spirit of goodwill as a means towards achieving the goals of the City Deal."

Milton Road Residents’ Association chair Charles Nisbet, welcomed the decision to support this alternative design. He said: "This is in so many ways an improvement on what the City Deal was proposing this time last year, which would have resulted in the destruction of Milton Road as we know it. The Do-Optimum design will meet the City Deal’s objectives of giving priority to bus travel and improving provision for walking and cycling in safety while providing visitors to our historic city with a beautiful, tree-lined entry. This proposal will go to the City Deal Assembly and Executive Board in March next year and we must keep up the pressure to ensure that the right decision is reached there."

Hurst Park Estate Residents’ Association chair Michael Page added: “The ‘Do-Optimum Alternative’ has been the result of an amazing team effort from a disparate group of local residents brought together with one goal in mind – to produce a lasting legacy for Milton Road and the city of which we can all be proud. The City Deal team have now been offered a great opportunity to take forward a plan that will win majority public support and set the tone for other projects around the city.”