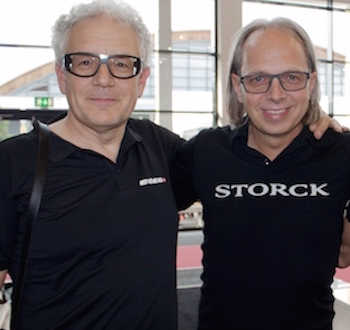 "Cambrian Tyres will be a great partner to help us to further strengthen our market position in Great Britain," said Storck founder and CEO Markus Storck.

"It’s always a pleasure seeing the UK’s cycling-scene with its overwhelming passion, and the co-operation with Cambrian Tyres will give the popularity and success of the Storck brand in the UK an important boost. Storck has been available in the British market since 1996, distributed by different partners. In 2010, Raddar UK – recently renamed Vielo Sports – started distributing Storck e-bikes. I sincerely thank both Ian and Trevor Hughes for the co-operation and their friendship over the past years."

Storck chief operating officer Guido Möller added: "The satisfaction of the end users and dealers remains our top priority. We continue to provide our British customers with our exceptional products, in future with an more excellent service and availability."

Cambrian brand manager Richard Eakins said: "We are very excited to be working alongside Markus Storck to increase the profile of Storck Bicycles in the UK. Storck is a unique and exceptional brand, and we’re confident their distinct heritage and values will set them apart in the UK market."

EDCO is a Dutch-owned wheel-brand, owned by Rob van Hoek. He bought the Swiss components company in 2007. At Eurobike 2016 BikeBiz saw the handshake that sealed the deal for Storck to partner with EDCO. Pic above shows van Hoek with Storck.