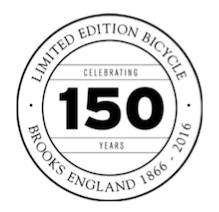 Brooks England has been celebrating its 150th anniversary through a cooperation with some of the best bike builders in cycling.

The project is based on interpretations of a Brooks bicycle, which are to be produced in limited numbers and sold worldwide.

Brooks have introduced a single theme – copper – to unite the designs. Each project has integrated this colourway into the design, whilst Brooks has prepared special saddles and accessories to complement the paint schemes, head badges, and other details on the finishing kit of each bike.

One of the first collaborations was released earlier this year, with Skeppshult of Sweden, dressed with Cambium components in brown.

Each model is featured in a rotating monthly display at the flagship B1866 store in Covent Garden throughout the remainder of 2016.