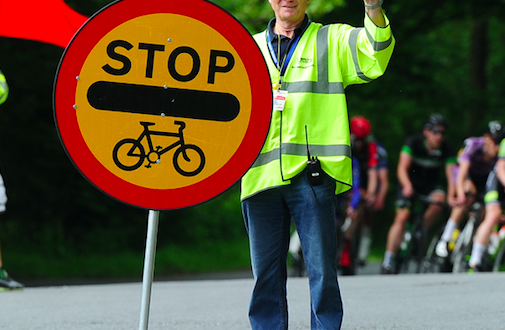 British Cycling to bring back Accredited Marshal Scheme in 2018

British Cycling has revealed plans to utilise the Accredited Marshal Scheme in 60 per cent of its regional road races across the country in 2018.

The scheme has been confirmed with the backing of almost 80 per cent of the nation’s police forces – further safeguarding the future of the sport.

The ‘Stop! Cycle Race’ sign, which features in the Department for Transport’s Traffic Signs Regulations and General Directions document, allows British Cycling trained marshals to legally stop and hold traffic to allow the safe passage of a cycle race.

There was a 52 per cent increase in road races using accredited marshals in 2017 compared with the previous year – illustrating the demand for the scheme.

British Cycling’s director of cycling Jonny Clay said: “The Accredited Marshal Scheme is playing a vital role in ensuring that road races are safe for all involved: riders, the race convoy and other road users. We are delighted with how the scheme has grown this year, and we’re determined to support its continued growth by working closely with volunteers and police forces in 2018.”

Lead for cycle racing on the highway at the National Police Chief’s Council Andy Battle added: “The Accredited Marshal Scheme was developed by British Cycling in conjunction with the DfT and the NPCC to provide a safe, sustainable and effective method of traffic management at road race events. The use of the sign and system has been growing over the last few years across all UK police forces as a practical and professional approach to race safety. The NPCC fully supports the use of the sign and marshals at these events.”