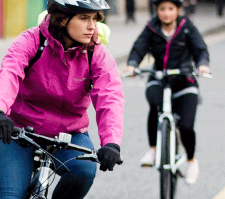 British Cycling, along with a coalition of other road user groups, is calling for cyclists to be excluded from government plans to restrict the recovery of legal costs when seeking compensation for incidents on the road.

The Ministry of Justice has said that it will increase the small claims limit in road traffic accident-related personal injury claims from £1,000 to £5,000.

According to British Cycling, this move – which is due to come into force in 2018 – would mean that thousands of injured cyclists will be denied the right to recover their legal costs in relation to seeking compensation for their injuries, as the majority of claims typically fall under the proposed £5,000 limit; approximately 70 per cent of cyclists who are injured through no fault of their own will be unable to recover their legal costs

British Cycling’s campaigns manager Martin Key said: “The current proposals are aimed at tackling fraudulent whiplash claims, and the government argues the reforms could save motorists £40 per year on their insurance premiums. However, whilst cyclists do not tend to suffer whiplash injuries, the reforms impact on all road users and not just drivers. It will become almost impossible for the majority of injured cyclists to get legal representation without sacrificing a significant proportion of any compensation that they receive.

“The government needs to be doing everything that it can to encourage more people to get on bikes. All this will do is put people off. We do not accept that the small claims limit needs to be changed at all. If the limits are changed, the increase should be in line with inflation only and limited to road traffic claims brought by occupants of motor vehicles.”