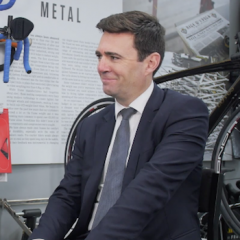 British Cycling has called upon the Mayor of Greater Manchester Andy Burnham to tackle the city’s increasing congestion problem.

Mr Burnham has asked for public responses to help alleviate the problem of overcrowded roads in Greater Manchester, with figures showing that residents across the region lose nearly 40 hours a year as a result of congested roads.

In an open response, British Cycling’s chief executive Julie Harrington has written to Mr Burnham to add the input of the organisation, which has called Manchester home for almost 25 years.

“Greater Manchester is British Cycling’s home and we care passionately about helping to make it one of the best places in the world to grow up, get on and grow old,” Harrington writes.

“Alleviating congestion is a big part of this, as are factors such as improving our air quality and combating physical inactivity which in turn leads to unhealthy communities and a burden on our local and national health provisions. Cycling is a proven way in which to accomplish this.

“Congestion is a complex issue but enabling alternative travel choices through the provision of safe space is imperative not only for congestion but also to deliver on improving our health through improved air quality and increasing levels of physical activity.

“The ‘Propensity to Cycle Tool’ shows that if residents of Greater Manchester were as likely to cycle as the Dutch we would increase commuter journeys ten-fold, leaving room on the road for people who had to drive. This level of cycling would lead to an estimated £1 billion per year saving to individuals and the local economy because of the resulting health benefits. The figures are staggering, however the solutions are proven, and within reach.”

According to INRIX data, Manchester is the second most congested city in the UK. British Cycling has welcomed Mr Burnham’s work early on in his mayoral reign on prioritising these issues.