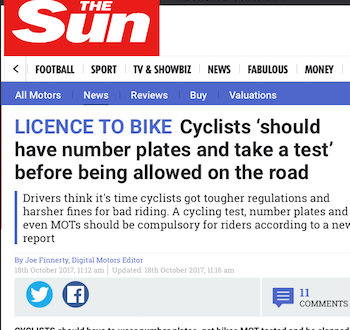 Halfords is facing a consumer backlash thanks to a report it issued which, among other things, said there was a "convincing" argument for cyclists to carry number plates. Motoring and cycling groups condemned Halfords’ "Sharing the Road Report" but the retailer’s social-media team have so far blanked the barrage of messages to "boycott Halfords."

Many consumers have said they will be shopping elsewhere from now on; and many have called for their networks to instead buy from independent bicycle shops. Halfords has not responded to requests to comment on this article.

Halfords and its external PR consultancy have been accused of providing anti-cycling ammunition to the mainstream media. For instance, The Sun headlined its piece on the Halfords report thus:

"LICENCE TO BIKE Cyclists ‘should have number plates and take a test’ before being allowed on the road."

The newspaper added "a cycling test, number plates and even MOTs should be compulsory for riders according to a new report."

The report was based on a YouGov survey commissioned by Halfords, and which had leading questions that would obviously lead to negative headlines against cyclists. BikeBiz made this point to Halfords’ external PR company but did not receive a response.

AA president Edmund King told BikeBiz: “The AA believes that the introduction of number plates for cyclists would be impractical and unnecessary – police already have the powers to stop cyclists.”

And British Cycling’s policy advisor Chris Boardman – whose bikes are stocked by Halfords – said "compulsory proficiency tests and number plates, are quite obviously non-starters and cannot be regarded as a serious contribution to the public debate on road safety."

He added: "Around 25 years ago, I was called into a Halfords board meeting to hear that the then owners (Boots) were considering shelving the cycling side of Halfords as Auto made the profit … Following significant negotiation effort to prove to the bean counters that Halfords could indeed be a cycling company, I led a project to change the cycling profitability. This worked and was the catalyst for all the positive improvements made through the 90s which ended up with increase in sales and margin, improved reputation and the introduction of Bikehut (the name I came up with).

"We worked very hard to change the perception of the business as a positive for cycling."

By ignoring the criticism of its flawed report Halfords risks causing itself lasting reputational damage. The cycle industry has previously provided a textbook example of how burying one’s PR head in the sand doesn’t work. Kryptonite vs Bic of 2005 was later a case study in a book by Patricia Swann, a public-relations professor at Utica College in New York, and the episode has also appeared in many other PR textbooks.

At the time we wrote: "From the word go, BikeBiz.com has said that in an age where consumers can rubbish a brand overnight it’s important not to underestimate the power of the internet."

Below are just a small selection of the social media postings calling out Halfords’ report, survey and subsequent press release, none of which are being responded to by Halfords even though its social-media team is responding to other messages.

Agreed – they won’t get my business any longer, bought car stereos, cleaning products and bike accessories from them in the past

Well, it’s pretty much evaporated any chance they had of getting a penny from me. Cheap, vindictive, dangerous. Shame, @halfords_uk.

So predictable – I occasionally buy from halfords because they are open evenings/ sundays. Will now make more effort to support my LBS!

Never using @Halfords_uk for any of my cycling or motoring purchases again in light of this nonsense.

Too right it will. @Halfords_uk @HalfordsCycling was always a last resort, but I'll never shop there again. #boycottHalfords

@Halfords_uk @HalfordsCycling Seems you have forgotten that a large % of your staff are cyclists. Great message you have sent to them