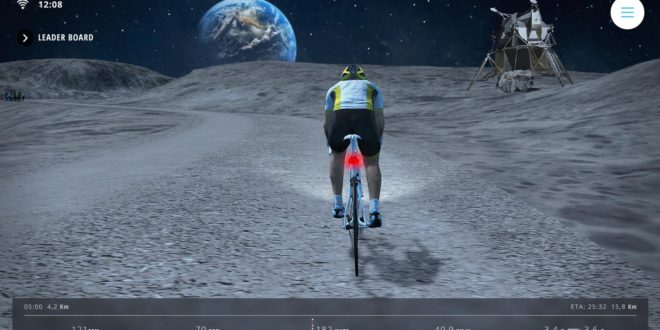 In an ‘out of this world’ first, indoor simulator company Bkool is giving riders the opportunity to ride on the surface of the moon with the new ‘Lunar Route’.

Using a combination of cutting edge GPX data and video footage from historical moon landings, Bkool has uploaded challenging bike routes across the moon’s  crater filled surface. (No, it hasn’t – sorry, this is an April Fool …)

Cyclists will be challenged by the craters and sharp inclines as well as the Marius Hills – a set of volcanic domes, with an average elevation of 200–500m and a gradient of 25 percent – the lunar steeps are replicated on the Bkool training bikes.

The route takes riders past the Apollo 11 landing site where Neil Armstrong and Buzz Aldrin made history back in 1969. Keen eyes will also spot the national flags and the three lunar roving vehicles left from past moon missions.

Bkool’s Luke Gold said: “We are thrilled to be able to give riders a once in a lifetime journey. For all those looking to ‘fly to the moon and play among the stars’, the Bkool simulator is the answer.”