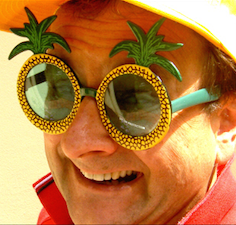 TV personality Timmy Mallett’s stolen bike has been found 60 miles from where it was taken.

The bike was recovered just ten days after it went missing thanks to an eagle-eyed youngster and BikeRegister.

Mallett – who presented the popular children’s programme Wacaday in the early 1990s – had his bike marked and registered to national cycle database BikeRegister at one of the many bike marking events that take place across the UK.

When the presenter realised his bike had been stolen, he accessed his account online on 24th March to flag it as stolen after the bike was taken in Maidenhead. He posted about the loss on Twitter saying: “My lovely Cannondale bike has been so much fun over eight thousand miles across UK in two years. Locked up in town, bike registered. Stolen. Upset.”

The bike was subsequently found just ten days later on April 3rd by a young boy called Nathan who spotted the abandoned bike as he walked through an underpass with his dad in Swindon, around 60 miles away.

Nathan’s dad saw a BikeRegister sticker on the bike’s frame and called the helpline number printed on the sticker to see if the bike was listed as stolen. After checking the details, a BikeRegister helpdesk operator contacted Mallet with the good news that his bike had been found.

After the recovery, Timmy was quick to tweet his thanks to Nathan – and to BikeRegister: “Brilliant news. My treasured bike found 60 miles from where it was taken in subway in Swindon. Thank you young Nathan! Bikeregister works.”

Share
Previous Hövding announces ‘future of cycling’ partnership with Justebikes
Next Why have cycle sales in the Netherlands dropped to a thirty-year low?