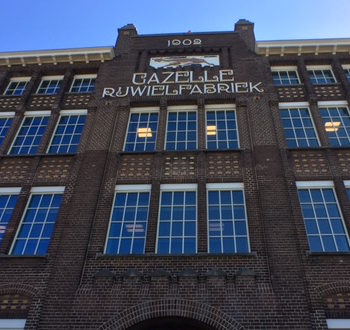 BikeBiz tours the Gazelle factory thanks to Velo-city side visit

The factory of Royal Dutch Gazelle was one of the optional site visits for delegates at this year’s Velo-city cycle advocacy conference, held in the Dutch cities of Arnhem and Nijmegen. BikeBiz jumped at the chance of visiting the Dieren factory, close to Arnhem. It’s a fusion between a building erected in 1902 and a 7000-square-metre assembly-and-paint-line housed in a state-of-the-art extension built in 2014, and opened the following year by King Willem-Alexander. (The Dutch king also officially opened Velo-city.)

The “Royal Dutch” prefix was added in 1992 on the company’s 100th anniversary. To get the prefix companies have to reach their cententary and only one company per industry sector can be bestowed with the title (unlucky, Batavus).

The Dieren factory employs 350 people – don’t think dark, satanic mills, this is a gleaming white production-facility with upscale worker canteens, a light and airy testing lab and a 1.6km-long paint production line. No photography is allowed in the factory (because of privacy concerns for the workers, and the fire risk in the paint shop) so watch the videos below. These are the same videos shown to site visitors on big screens at stopping points in the factory.

Opened in 1902, the current factory was built over an earlier one from 1902. And this factory was built after the expansion of the business founded in 1892 by Dieren domiciled postal manager Willem Kölling who imported bicycles from England. He soon teamed up with blacksmith Rudolf Arentsen and the two-man business made a handful of bikes in Arentsen’s forge, a building which still stands, close to the current factory.

Gazelle now produces 275,000 bikes a year, of which 70,000 are e-bikes. The frames are constructed in Asia, but painted and assembled in Dieren.

Pon Holdings has owned Gazelle since 2011.

Also on the Velo-city tour was Schwalbe MD Frank Bohle. BikeBiz took a sneak pic of him when a pile of Schwalbe tyres was spotted – the factory didn’t explode.