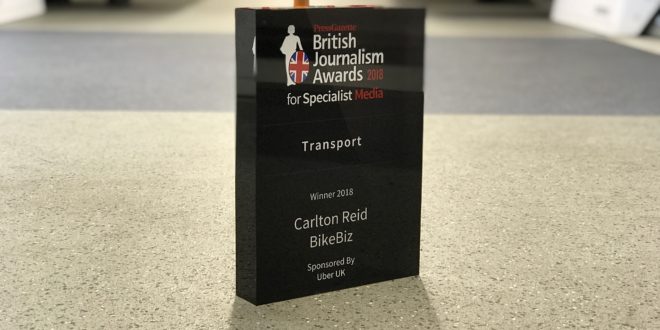 Editor-at-large Carlton Reid won Transport Journalist of the Year 2018 for his series, Faking It.

He said: “It was lovely to win, of course, but I’m most pleased that cycling was also recognised. Cycling is transport.”

The judges said: “This story was researched in huge detail to shine a light on one of the most serious issues in the cycling industry – counterfeiting. This was excellent writing expertly targeted at a specialist market.”

Other nominees for the Transport category were Mark Frary, Rob Gill and David Churchill from Buying Business Travel, Will Dalrymple from Transport Engineer, Tom Richmond from The Yorkshire Post and Steve Dale and Mike Walter from Transportation Professional.

The British Journalism Awards launched six years ago and the decision to launch a spin-off event was prompted when a huge number of entries were received for the Specialist Journalism category last year.

The new awards aim to recognise great journalism being carried out on specialist and B2B titles and by specialist journalists working in the mainstream media.

Voting will close this Friday, 7th October, for the BikeBiz Awards 2022 in association with …