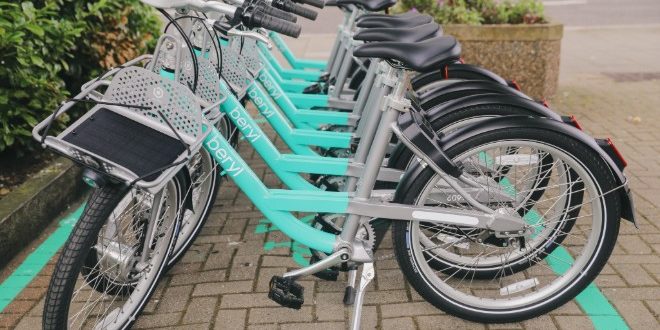 Bike-sharing: The silver bullet for environmental and public health?

At the end of June, Beryl introduced its hybrid bike-share scheme to Enfield. Rebecca Morley attended the launch event and caught up with Philip Ellis on this evolving trend

Cycling is growing in London. Recent TfL figures show that across the whole of the capital, 2018 saw the highest and fastest growth in kilometres cycled since monitoring began, increasing almost 5% from the previous year. For the first time, the average daily volume of cycling in London is more than four million kilometres.

Beryl is hoping to capitalise on this cycling potential with its bike-share system across London and the rest of the UK. On 28th June, it held a media launch event for the scheme in Enfield. This is the first time the scheme will be introduced to London before it rolls out in other parts of the city, including the City of London. It currently has bikes in Bournemouth, Christchurch and Poole.

“The cycling potential is massive in Enfield,” says Beryl CEO Phillip Ellis. “It’s one of the boroughs with the highest car ownership at the moment. On top of that, the local authority here has got a really serious strategy that’s funded, with political support, to start encouraging more people to cycle.

“The combination of those things makes us think there’s a really good, pent-up demand for a good bike-share system here.”

Enfield inhabitants and visitors can now hire a Beryl bike through its app on iOS and Android. The bikes can be picked up and dropped off in marked ‘Beryl Bays’ that have been selected and approved in conjunction with Enfield Council. Initial locations will include transport hubs such as Enfield Chase train station and Arnos Grove tube station, as well as the entrance to parks such as Broomfield Park.

Although dockless, a £1 fee to leave the bike outside of one of the borough’s 50 designated parking bays aims to keep the bikes in the bay. Those that do end up in other places will be collected and returned by Beryl’s staff.

The big city
Beryl is already in Bournemouth and Poole, but operating in London will present a whole host of further opportunities due to the cycling potential. Ellis points to high numbers of people cycling in London and says there’s a bigger opportunity to get people cycling due to the cost of other modes of transport in the city and the time it can take to drive. “The opportunity in London to have a successful bike-share scheme is massive, but it’s extremely complex and extremely challenging, for a whole host of reasons, that are there in Bournemouth and Poole, but I’d say are slightly more extreme here,” he explains.

“The size of it, the political boundaries of the local boroughs, the complexity of the transport system that’s managed already and of course the competition that we face as a bike-share system.”

Bike-share schemes already operating in London, outside of Santander Cycles, include Mobike, Lime, Jump and Freebike, all providing an element of competition to Beryl. “They’re competition because they’re bikes, but if they’re helping people to make journeys by bike, rather than by car, more power to them,” Ellis says.

Keeping track
As promising a concept as bike-sharing is, one significant hurdle throughout the past few years has been vandalism. Derby’s electric bicycle scheme is set to close – the recent surge of unprecedented vandalism and increasing costs have made it commercially unviable for the operator.

While the general level of vandalism had been much lower than other schemes have experienced, due to the recent systematic vandalism carried out in April and May by a group of offenders, more than 67% of the e-bikes fleet became inactive, and the estimated cost of repairs was significant. As a direct result, and coupled with changes in the industry, Hourbike has struggled to cover the maintenance and operational costs, and the scheme is no longer financially sustainable.

In April this year, Mobike announced that it was suspending its service throughout Newcastle and Gatehead, a move that was believed to be in relation to vandalism issues in the area with a significant number of rides dumped in the River Tyne. This came after it suspended its service in Manchester last year, again suffering increased bike losses due to theft and vandalism.

So how can other bike share schemes prevent this from happening to their bikes?

Ellis says: “Our bikes are tracked constantly – they’re constantly connected to the internet with a SIM card and a GPS. We never track a user’s mobile phone, which is important from a data security point of view and the trust of our customers. We’re not tracking people – we’re tracking the bike because we want to know where it is!

“For the scheme to work efficiently, we need to be able to intervene quickly if there is a bike where it shouldn’t be – whether it’s been pinched or whether it’s made its way there by virtue of someone cycling it to an unexpected place.”

He continues: “The last thing anybody wants – ourselves, our customers and the local authorities – is a bike vandalised, not rideable and not giving anybody any benefit. 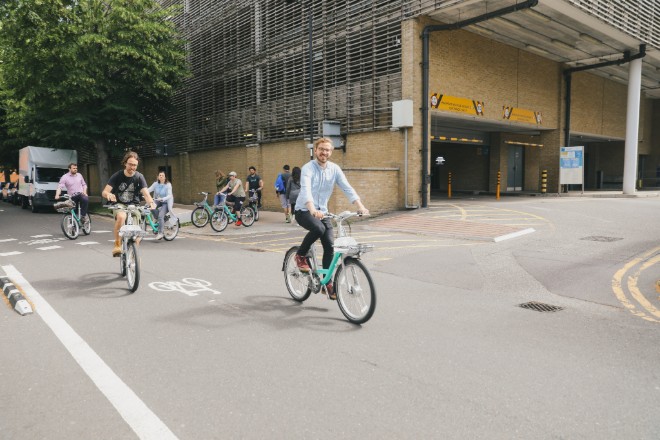 Future potential
Alongside Enfield, Beryl has also launched in the City of London and Hereford this summer, demonstrating the potential bike-share schemes can have not only in big cities, but also in smaller towns. Anything that can encourage people to cycle will be beneficial to the wider industry, and schemes like this are great at introducing people to cycling and building up their confidence in the saddle.

“My observation of bike-share systems in big cities like London is that the Santander bike-share system has helped a lot of people to cycle – there are a lot of journeys happening on those bikes that would have happened by a less sustainable means,” Ellis says.

“Cycling is the silver bullet for environmental and public health, and there’s a certain number of people who have been using the Santander bike-share system that have contributed to that benefit.

“I’ve observed a bit of a cultural shift by virtue of the bike-share system. You see it in statistics all over the world. If people are using a bike-share system, often they will then convert to being a bike owner themselves, and that’s great. That means more people cycling and more people making sustainable and healthy choices.

“It’s not necessarily about people using a bike-share system and not buying their own bike, it’s about using it because it can be more convenient in certain circumstances, and it can be a nice stepping stone into involving a bike in your lifestyle a bit more, and if that means you buy a bike, great.

“Overall in the UK there are massive opportunities – there are really big cities that are looking at bike-share systems, and could benefit from bike-share systems. We’ve got a system that we think is designed for the UK market, we’ve got a really good understanding of what UK cyclists expect, and what pricing level, what level of quality and service, and we’re pretty focused on delivering that to UK cities, and also smaller towns. There’s a huge number of towns that could benefit from a bike share system if we can make it work in that size.” 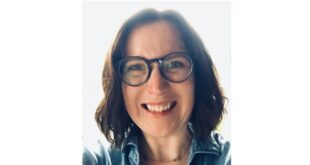