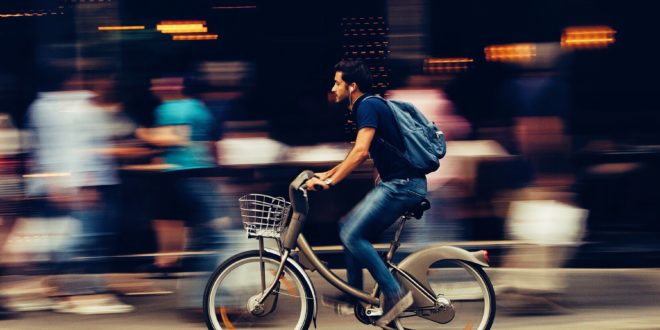 Bicycle sales are expected to ‘surge up steadily’ between 2018 and 2026, Persistence Market Research reports.

Intensifying traffic congestion issue and elevating fuel prices are foreseen to remain the key factors driving the need for cycling, and therefore raising the demand for bikes. Growing health concerns among consumers, in addition to the acceptance of green transportation in an effort to reduce carbon footprint, will play a ‘pivotal’ role in the growth of the global bicycle market in the next eight years. Increasing Government support encouraging the adoption of bicycles and the development of dedicated cycling infrastructure in developed as well as developing economies will reportedly push the sales of bicycles in upcoming years.

As sharing and rental services are currently gaining higher traction in the global bicycle market, stakeholders are reportedly striving to adapt to this trend. A large number of corporate embracing cycling as a sustainable alternative to commute will be a factor impacting the sales of bicycles in the next few years. At a CAGR of 4.2%, the global market for bicycles will attain the revenue approaching US $80 billion during 2018-2026. The market was valued at around US $55 billion in 2017.

China has been contributing to global market growth over the past decade. Besides China, the market is likely to witness substantial growth of other export-oriented countries, including Germany, Taiwan, and Netherlands. Premium and mid-range bicycles are anticipated to witness higher traction within European and North American markets over the next decade. The Chinese market provides an extensive range of low-cost products, which has enabled it to maintain the top position in terms of sales. China currently grabs a winning market value share of over 44%, followed by South East Asia Pacific and Europe. 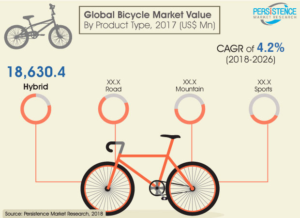 The key findings from the report were:
– Sports bicycles are expected to emerge at a rapid pace, taking over hybrid bicycles in terms of growth rate. Mountain bicycles are poised to witness moderate traction in coming years
– E-bikes continue to win over conventional bicycles, in terms of both supply and demand. China is foreseen to be the global leader and the dominant hub for supply and demand of e-bikes
– Europe and South East Asia Pacific will also retain the key market positions, whereas North American market is anticipated to experience ‘sluggish’ growth during 2018-2026
– While SEAP and Europe are projected to exhibit the highest growth rate values through 2026, Latin America is identified to ‘unravel a heap of opportunities’ for stakeholders, especially in the e-bike segment
– Evolving consumer demographics in developing economies will predominantly drive sales of mid-range bicycles, followed by premium priced cycles