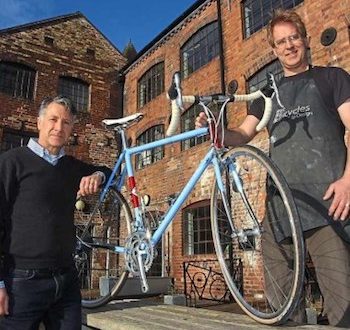 Bicycles by Design profiled by BBC

BBC property programme Escape to the Country profiled Bicycles by Design on Tuesday. The Coalport company is owned by 30-year industry veterans Peter Bird and Robert Wade. They made Swallow hand-built bicycle frames – and other products – from a former industrial warehouse close to the historic valley of Coalbrookdale.

Presenter Jonnie Irwin – said by the BBC to be a "keen cyclist" – interviewed Bird for the five-minute profile, and even had a go at welding the dropout on to a fork. Irwin praised the "artisan level craftsmanship" at the firm, but said it was also at the bleeding edge of new technology because it made bikes with "built-in wifi to change gears.”

The episode is available to watch on the BBC iPlayer. It starts at 35 minutes 46 seconds.