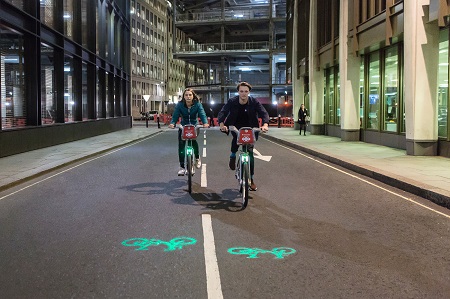 beryl has partnered with BIXI Montréal, a Canadian public bike sharing scheme, to increase safety for users by equipping bikes with its Laserlight technology.

Laserlight, which has already been deployed across the London Cycles bike share scheme, is designed to allow road users to anticipate cyclists in their blind spots or at crossings. The lighting system consists of installing a laser that projects a green bicycle symbol onto the road, five metres in front of the cyclist, providing better visibility for both the cyclist and other road users.

In recent years, Montreal has seen a spike in cyclist fatalities, with new research finding that trucks have caused 20 per cent of cyclists deaths in the city since 2005. The Canadian city has taken action to prevent these collisions through the implementation of new bike lanes, and supplying their cycle hire scheme with Laserlight. The lights will be on 56 of BIXI’s bikes.

Christian Vermette, CEO of BIXI Montréal said: “More than 20 per cent of the trips taken in Montreal are in the evening, and this number will reach more than a million trips in 2018. These statistics have made us explore different options to equip our bikes with a technology that will allow users to remain safe on the roads. So we were very interested in beryl’s proposal to check out their technology, which has been approved by the Transport Research Laboratory for Transport for London.

“The Laserlight has proven to be very effective on the Santander Cycles fleet, and their bikes are identical to ours. New York City has also adopted this technology for their Citibike fleet. The demonstration was extremely convincing.”