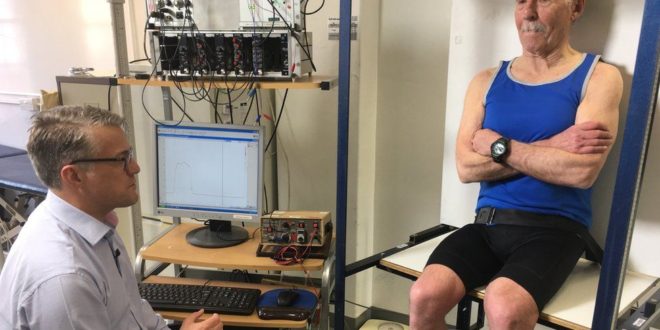 The aptly-named Norman Lazarus is 82 years old and, to put it bluntly, he’s cheating death. Or, at least the type of death that’s all too common in our sedentary society – death from inactivity. Professor Lazarus cycles a lot, and he has the immune system of a 20-year-old.

He’s one of the elderly long-distance cyclists that featured in a report last night on the BBC Ten o’Clock News. The BBC’s medical correspondent Fergus Walsh rode with Lazarus and other Audax riders, and pointed out the many anti-aging health benefits of cycling.

"If exercise was a pill, everyone would be taking it," said Lazarus of King’s College London. He took part in and co-authored new research which shows that exercising into old age has restorative powers. The research – published in the medical journal Aging Cell – followed  125 long-distance cyclists, some now in their 80s, and found they had the immune systems and body-fat levels of teenagers.

Professor Janet Lord, director of the Institute of Inflammation and Ageing, at the University of Birmingham, and co-author of the research, told the BBC: "The immune system declines by about 2-3 percent a year from our 20s, which is why older people are more susceptible to infections, conditions like rheumatoid arthritis and, potentially, cancer.

"Because the cyclists have the immune system of a 20-year-old rather than a 70- or 80-year-old, it means they have added protection against all these issues."

A separate paper in Aging Cell found that the cyclists did not lose muscle mass or strength, and did not see an increase in body fat. The BBC report showed a scan of Professor Lazarus’ thigh and that of a man of a similar age but who was sedentary – the cycling professor’s muscle mass was clearly greater.

Walsh said: "I met a dozen of the cyclists, on a morning ride in Surrey. Despite the bitter cold, they were universally cheerful, and clearly used to riding in all weathers.

Pam Jones, 79, said in the BBC report: "I do it for my health, because it’s sociable, and because I enjoy the freedom it gives you."

Brian Matkins, 82, said: "One of the first results I got from the medical study was I was told my body fat was comparable to that of a 19-year-old."

Spring-chicken Jim Woods, a mere 64, said: "I cycle for a sense of wellbeing and to enjoy our wonderful countryside."