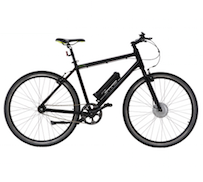 The new electric bike from Aerobike, named the X-Ride, will retail at £799.99 in the UK.

The modern pedal-assist pushbike is designed primarily for the commuter or city markets.

The bike features a lithium-ion battery that is capable of powering the motor for up to 30 miles. As with all UK e-bikes, the motor is limited to a 15.5 mph speed limit and features SRAM Automatix gear system, which means that it doesn’t require manual gear changes.

The bike and gearing system is operated by an on-board computer which works with torque sensors that constantly analyse the user’s pedal power to deliver boosts when needed.

Dan Price of Aerobike commented: “The ability to get around as easily as possible is a huge part of modern life. By launching Aerobike, we’re creating a brand that can genuinely help people get around, with a whole host of features at a very fair price.”

He added: “We’ve spent a long time on R&D with the X-Ride; it’s been developed by cycling enthusiasts, but because of its design, it’s a bike that suitable for everyone. From commuters, to people who just want to start cycling again. It’s a great time to be able to launch, as electric bikes have never been more popular.”

Aerobike is offering a 14-day user trial period, and has partnered with cycle scheme Bike2Work to deliver the bike at an accessible price.