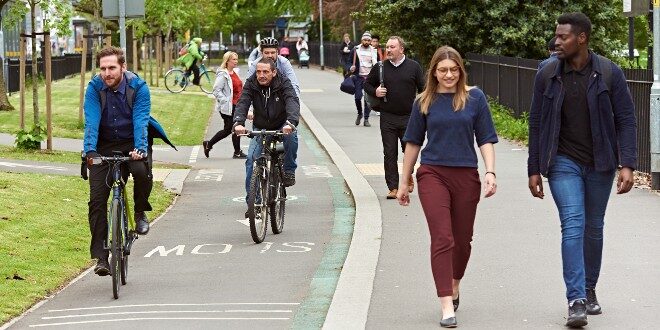 A Greater Manchester COVID-19 recovery survey has found almost half (47%) of respondents want to keep on walking and cycling more often once the pandemic is over after positive experiences on bike and foot during lockdown.

Transport for Greater Manchester’s (TfGM) network intelligence data has also shown that cycle trips are up 25% on the equivalent period last year (March 2020).

Data taken from TfGM’s on-street sensor technology has also been released today, showing ten locations where cycling levels have hugely increased across the city-region since the pandemic began in March 2020. They are:

To coincide with the new figures being released, TfGM has launched a new active travel website, a one-stop-shop for all things related to cycling and walking. The website showcases Greater Manchester’s ambitious plans to deliver the UK’s largest cycling and walking network – The Bee Network – to give all GM residents an alternative to driving.

Greater Manchester’s cycling and walking commissioner Chris Boardman said: “It’s fantastic that half of people living in Greater Manchester have said they plan to travel more on foot or by bike post-COVID. Many have tried it during lockdown and they’ve decided it’s a daily habit that they want to keep. We intend to make sure they have the safe space to do it.

“We’re now well into our first year of delivery for the Bee Network, with 55 miles of safe routes and 17 Active Neighbourhoods planned before the end of the year. As activity increases, now is the perfect time to launch our new website to showcase all the fantastic new routes and street improvements being delivered in the coming months. I’d encourage residents to take a look and see what’s happening near where they live and work.”

The new website has an interactive map at its heart, showing people what is completed, under construction or out for consultation where they live. It also highlights the destinations that are within a 15-minute walk and a 15-minute bike ride of their front door. The website can also be used to book cycling confidence sessions, get tips and practical information, and find out the latest news about the city-region’s plans, with more being added all the time.

TfGM worked with Manchester-based brand and creative agency Dinosaur on the creation of the new website.