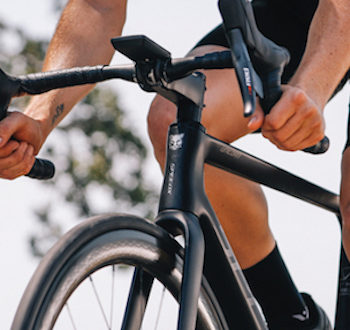 Chinese bike brand SpeedX – which said it had recently raised more than $22m in angel funding – has launched its latest "smartbike" at the CES tech show in Las Vegas. The Unicorn features a an integrated SpeedX power meter, and has been placed on Kickstarter.

In 2014 the first SpeedX smartbike was launched on Kickstarter. Then came the SpeedForce bike computer that raised $450,000 on Indiegogo. And in March 2016, SpeedX launched the Leopard smart bike, which became the most funded road bike project on Kickstarter with over $2.3 million in pre-sales.

“With the SpeedX Unicorn we’ve pushed limits to develop a one-of-a-kind lightweight road bike. We introduce our in-house built technology 9vibration damping] to enhance more comfort when riding along with our built-in power meter with 99% accuracy, and a completely redesigned SpeedForce running on Android OS,” said Raggy Lau of SpeedX’s CMO.

The Unicorn’s integrated power meter is claimed to remain charged for 400 hours and has been tested against SRM where it is said to have recorded 99 percent accuracy. The bike also has SpeedForce, a integrated cycling computer with a 2.2-inch touchscreen.

Late last year Beijing-based SpeedX claimed it has secured $22m to ramp up R&D. The Chinese brand was lauched via crowdfunding, with separate campaigns on Indiegogo, Kickstarter and JD.com of China.

Product started shipping – slowly – to backers in September. The bike is manufactured in China and assembled in Taiwan. The original sticker price of the first SpeedX bike was attractive to consumers although this didn’t take into account VAT, taxes and dumping duties.

"Since the first SpeedX models went on sale in 2016, SpeedX have invested further in employing extra teams of highly trained staff within their production and shipping facilities to fulfil demand," says a company statement.

"Looking forward to 2017 and beyond, SpeedX have recently secured a second round of investment totalling $22 million USD – which will be used to build on their existing R&D program and expand their production capabilities to ensure customers are getting the best end product available with reduced delivery times."

The SpeedX frame is designed by international consultancy Frog Design, and made by Fibertek of Xiamen, China.

SpeedX is exhibiting at the International Consumer Electronics Show in Las Vegas.