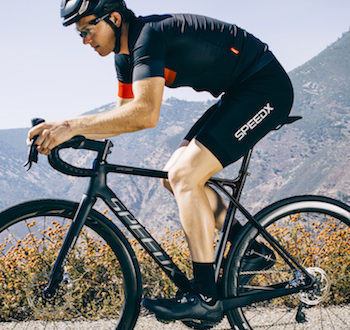 Beijing-based SpeedX is claiming it has secured $22m to ramp up R&D. The Chinese brand was lauched via crowdfunding, with separate campaigns on Indiegogo, Kickstarter and JD.com of China. $2.3m was raised on Kickstarter in March from 1,251 backers for the Leopard, an aero road bike with stem-integrated "smart" functionality such as ride data recording (but no power measurement). A month later a further $3m was raised on Indiegogo for the same bike. $1.8m of pre-order sales were also logged on JD.com.

Product started shipping – slowly – to backers in September. The bike is manufactured in China and assembled in Taiwan. The original sticker price – $1,399 – was attractive to consumers although this didn’t take into account VAT, taxes and dumping duties.

"Since the first SpeedX models went on sale in 2016, SpeedX have invested further in employing extra teams of highly trained staff within their production and shipping facilities to fulfil demand," says a company statement.

"Looking forward to 2017 and beyond, SpeedX have recently secured a second round of investment totalling $22 million USD – which will be used to build on their existing R&D program and expand their production capabilities to ensure customers are getting the best end product available with reduced delivery times."

In January, the company will place another model on Kickstarter, the Unicorn.

“Going from startup to manufacturing has been a fascinating and exciting journey, we have worked hard to deliver what we promised and have taken all feedback on board so we can continue to provide customers with the best, most advanced product moving forwards.”

Lau said the company will be displayed at CES Unveiled, part of the International Consumer Electronics Show in Las Vegas, on 3rd January and will also have a booth at the show.

Before the company went on Kickstarter and Indidgogo it received backing from Chinese investors.

“We gained three rounds of investment. First was the angel investment from Xu Xiaoping, who is founder of ZhenFund and also my mentor. This was around $1m. We then gained Series A investment from Kai-Fu Lee (Innovation Works) who was formerly a VP at Apple and Microsoft. That round was around $8m. Most recently, we received around $4.5m in Series A+ financing. In total we have around $15m."

SpeedX started by selling a Strava-style app and went on to produce the SpeedForce "smart" stem that integrated with this app. The company was founded in December 2014 as Beijing Beast Technology Co., Ltd and later became known as Beast Bikes, before settling on SpeedX.

The SpeedX frame is designed by international consultancy Frog Design, and made by Fibertek of Xiamen, China.

BikeBiz has a number of article about Chinese-made frames and the "cream, competent and cowboy" factories that make them.