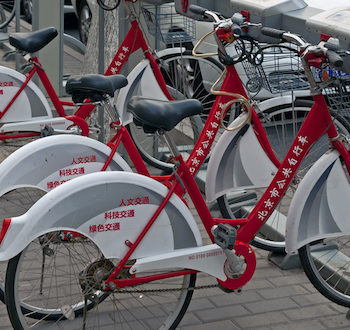 China’s burgeoning bike share sector generated 70,000 new jobs in the first half of 2017, reports China’s national English language newspaper the People’s Daily. It adds that this is 1 percent of all the new jobs in China.

While players such as Wukongbike have been forced out of the market thanks to lost or damaged bikes, others – such as Ofo and Mobike – continue to expand, in China and abroad.

About 70 bike-sharing brands – many of them "dockless" – have sprung up in China in the last two years placing nearly 20 million bicycles on streets around the country and attracting over 130 million users, according to figures from China’s Ministry of Transport,

Earlier this year China’s State Council gave the new sector its blessing saying it was an example of innovation and entrepreneurship. Premier Li Keqiang said: "We should give credit to the sharing economy as a reinvigorating force in China’s economic growth."

The State Council stressed that authorities are tasked with improving public services in terms of data sharing, government service procurement, urban planning and resources management innovation. The sharing economy will grow at an average annual rate of 40 percent over the next few years and will account for more than 10 percent of the country’s GDP by 2020, believes the Council.

However, the haphazard placement of bikes in Chinese cities has led China’s Ministry of Transport to issue guidelines to bike-share companies requiring real-name registration and urging local governments to better manage bike sharing.

"The regulation of sharing economy should be tolerant while prudent, as there is still much yet to be learnt about new business models," said Premier Li last month.

Bike-sharing providers are banned from offering bikes to children under the age of 12 and are not encouraged to offer electric bikes.

Not that this last rule has stopped Zhejiang Linju Smart Technology Co. – it has placed 400 folding share e-bikes in the city of Jinhua, Zhejiang Province, where the company is based.

"We will put 40,000 e-bikes on the streets of Jinhua by September 2018," said Chen Qiutian, general manager of the company, citing an agreement it signed with the local government. It has a goal of releasing 150 million e-bikes in 20 cities by 2021.