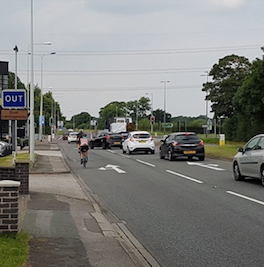 A £1.1 million scheme to improve safety for cyclists at a busy junction near Ellesmere Port has been announced.

The Highways England project at Two Mills, where the A550 meets the A540, is due to start on Monday, July 17th. A new 320-metre cycle path will be created through the junction, with traffic lights and toucan crossings making it easier to cross the A550.

The right turn lanes onto the A540 from the A550 will also be improved and a new high-friction road surface will be laid to reduce the risk of collisions at the junction. The A540, which runs between Chester and Hoylake, is popular with cyclists and group rides set off from a cyclists’ café near the Two Mills junction during most weekends throughout the year.

Project manager at Highways England Phil Tyrrell said: “We’re committed to significantly improving safety across our road network, and the new cycle path as well as the wider and longer right turn lanes will make it much easier and safer for drivers, cyclists and pedestrians to cross the junction. We will do everything we can to keep disruption to a minimum while the work is taking place, and look forward to seeing the new cycle path open in time for the spring.”

The new cycle path, which will be shared by cyclists and pedestrians, will run along the southbound A540. The route will cross two new islands on the A550 at the Two Mills junction before continuing along the A540. Two crossings will also be created at either end of the cycle path for people travelling in the opposite direction. The bus stop on the A540 will be moved to the opposite side of the junction to allow space for the new cycle path.

Most of the work will be carried out overnight between 8pm and 5am, with some work also taking place at weekends. A series of overnight lane or road closures will be in place on most nights, with clearly-signed diversions. The scheme is due to be completed by spring 2018.