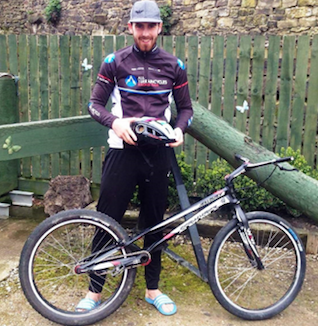 Twenty-year-old mountain bike trials cycling champion Jack Carthy of Haworth is the latest young Yorkshire rider to be supported by bike retailer All Terrain Cycles, which opened its doors in 1907.

Carthy, who grew up in Haworth and went to Oakbank School in Keighley, first came to the notice of the cycling world in 2012 when, competing in the 26-inch category, he took third place at the UCI World Cup in Belgium at the age of just 16. A year later, he won the fifth and final stage of the UCI World Cup in Antwerp and took home a bronze medal overall; last year he went on to win both the World Cup and the World Championship – the first time that a rider has won both titles the same year.

Carthy is now being supported by co-owner of Keighley NRGym Nick Hindle who has taken on the role of coach and manager. Hindle explains: “I’ve known Jack for a couple of years; he’s done phenomenally well just on the strength of his natural talent – to have won both titles in his first season in men’s elite is amazing. Since September, we’ve been working together and I’ve devised a bespoke fitness regime and nutrition programme for him to make him stronger, faster and leaner.

“Getting the right sponsors behind Jack is crucial and it’s fantastic to have so much local support. I’m a long time customer of All Terrain Cycles and know how committed they are to supporting young riders in Yorkshire, not only are they providing kit and parts, the experts at All Terrain are also giving technical advice to help Jack get the best possible performance from his bike.”

Carthy added: “I’m passionate about trials riding and really excited about this year’s world cup which gets underway in May – thanks to Nick and my sponsors, I feel I’m at the top of my game and hungry to win; I hope that my success will encourage more people to get involved in this exhilarating sport.”

Managing director of All Terrain Cycles Tony Booth concluded: “It’s great to be helping develop young local talent like Jack – to have a prized rainbow jersey in Yorkshire is something we should all be proud of. Jack has been invited by Welcome to Yorkshire to display his stunt riding skills at this year’s Tour de Yorkshire events and is an inspiring role model for youngsters interested in trial biking.”