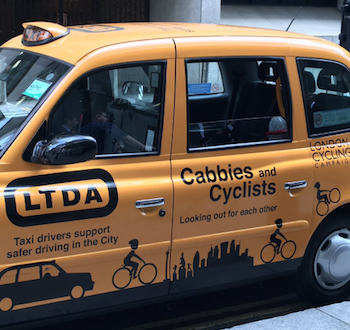 Wrapped-taxi is sign of peace between cabbies & cyclists in London

The London Cycling Campaign has joined forces with Licensed Taxi Drivers Association to promote a safety campaign aiming to reduce both conflicts and collisions.

As part of the City of London’s Road Danger Reduction Plan, the two groups have agreed to promote safer driving and safer cycling to their members.

The LTDA has signed up to the following four point plan, which it will promote to its 11,000 drivers throughout the capital.

The London Cycling Campaignwill promote the following four-point plan to its 12,000 members"

· Always looks out for taxis and avoids “undertaking” when a cabbie indicates to pick up/drop off a fare.
· Always takes account of the conditions, and slows down on busy streets.
· Always indicates clearly when making a turn and looks out for other road users when overtaking or changing lanes.
· Always makes sure they have working lights for cycling in the dark.

Police investigation statistics on all injury-inducing collisions within the City over the last 10 years found that over 60% of taxi collisions derived from:

· The failure to look properly.
· A poor turn or manoeuvre.
· A careless or reckless decision taken as the driver was in a hurry.
· A vehicle door being opened or closed negligently.

Meanwhile, the statistics also found that the majority of cyclists’ collisions came rom:

· The failure to look properly.
· The failure to accurately judge another road user’s path or speed.
· A careless or reckless decision taken as the rider was in a hurry.
· A poor turn or manoeuvre.

The agreement between the two groups will be promoted by a wrapped taxi which will be driving London’s streets until Christmas. The agreement will be published in both groups’ member magazines and further initiatives such as ‘changing places’ – cabbies on bikes and cyclists in taxis – are planned for the coming months.

The agreement was signed by the LCC chief executive, Ashok Sinha, and general secretary of the LTDA, Steve McNamara.

“As cabbies, we often get a bad press for not looking out for cyclists. We are, however, the best trained drivers on the city streets, recognizing the need to share the streets with all users and are always looking to increase the safety of our passengers, pedestrians and cyclists. Far from being our adversaries, cyclists are regular customers, with cabbies often accepting both bike and rider in the back of a cab when circumstances make cycling impossible. We will be promoting the ‘take care of cyclists’ message to all of our members, and plan to train some of the City of London drivers in cycle skills session later this year. ”

“More and more people are enjoying the convenience and pleasure of cycling to and around the City. But fear of collisions is the biggest barrier to even more people enjoying the benefits doing so. The London Cycling Campaign is pleased to join the LTDA and the City in this initiative. Every road user has a part to play in making our streets safer for all, and by taking the steps set out today, cabbies and cyclists can help reduce the number of collisions on the City’s streets.”