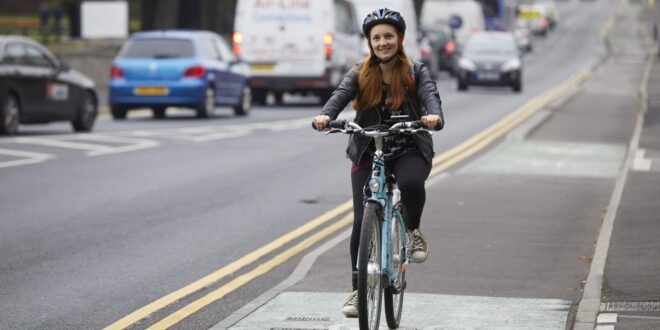 Work has started on a new three-kilometre segregated cycle lane in West Yorkshire.

The construction of the new cycle lane on Elland Road, Leeds, is part of a £6.9 million package of new infrastructure delivered through the Combined Authority’s CityConnect programme, which is aimed at enabling more people to travel by bike or on foot, in partnership with Leeds City Council.

The scheme, alongside other work to help people move around the region safely, has been brought forward as part of the emergency response to the COVID-19 pandemic. The new segregated cycle route will run from Elland Road Park and Ride to the city centre.

Work is due to start later this year on a scheme to extend the existing segregated cycle route on Dewsbury Road with a new 1.5-kilometre section between Garnet Road and Beeston Ring Road. In the north of the city, work is already underway on a new segregated cycling and walking route on Claypit Lane.

The work to improve Clay Pit Lane for people travelling by bike and on foot between north Leeds and the city centre includes a 1.3-kilometre segregated route between Chapeltown Road and Woodhouse Lane. The new section will link to existing routes on Meanwood Road and provide people with a safer crossing over the Inner Ring Road.

The scheme also includes a new continuous route for people travelling on foot into the northern part of the city centre.

Councillor Kim Groves, chair of the West Yorkshire Combined Authority’s Transport Committee, said: “Enabling increasing numbers of us to travel by bike and on foot is more important than ever, not only as we look to address the health, transport and economic challenges created by COVID-19, but also in helping us achieve our aim of becoming a net-zero carbon economy by 2038.

“These important schemes will provide communities in Beeston, Holbeck and Hunslet, as well as those in the north of the city, with high-quality cycling and walking routes and the Dewsbury Road scheme will provide an important missing link in the existing network to create a continuous 4.4km segregated route for south Leeds.

“From connecting people across our region, to reducing air pollution and congestion, and combatting physical inactivity and obesity, we know getting more people cycling and walking has a vital role to play in making West Yorkshire a great place to live and work.”

“We’re delighted we are bringing the construction phase of these schemes forward for new segregated cycle routes south of the city connecting Beeston, Holbeck, Hunslet and the city centre, as well as important work on Clay Pit Lane and Meanwood Road. Every new piece of segregated cycleway in Leeds gets us nearer to the 500 miles of cycle network we are aiming to deliver across the city.

“In this COVID-19 recovery phase, Leeds is creating many more new routes which offer improved safety for people who walk and cycle, offering convenience and championing health and wellbeing for our residents. Alongside improved segregated cycleways the scheme will improve the environment for pedestrians. This work funded through CityConnect will improve environmental sustainability, better air quality and reduce pollution of all types in and around Leeds. We look forward to seeing the schemes completed later this year.”

This work will build on CityConnect’s Leeds Bradford Cycle Superhighway, which opened in 2016, as well as the additional four kilometres of segregated routes that opened last summer connecting the eastern and western sections of the cycle superhighway with the city centre.

It also plays a part of Leeds City Council Connecting Leeds “Cycling Starts Here” ambition to create 500 miles of safer cycling routes across the city. A public consultation on these schemes, including drop-in events at community venues, was held last summer.

The West Yorkshire Combined Authority is working in partnership with local authorities to deliver a package of emergency measures, including trial cycling and walking infrastructure, to help people move around the region safely in response to the COVID-19 pandemic.

This work includes both short and longer-term proposals, which have been submitted to Government to access £12.5 million funding for West Yorkshire through the Emergency Active Travel Fund. An online map has also been created for residents to highlight areas where improvements are needed to help more people travel by bike or on foot.