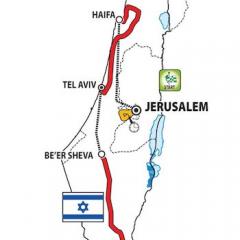 Following protests from Israeli government ministers over wording used in yesterday’s race presentation Giro d’Italia organiser RCS Sport has issued a statement. It "would like to clarify that the start of the Giro d’Italia 2018 will take place from the city of Jerusalem," said the RCS Sport statement.

It continued: "During the Presentation of the 2018 race course, technical material containing the wording "West Jerusalem" was used, due to the fact that the race will take place logistically in that area of the city.

"That particular wording, devoid of any political value, has been removed from any material related to the Giro d’Italia."

Had such a clarification not been issued the Israeli government could have withdrawn support for the race, which is scheduled to start in Jerusalem in May.

Since the annexation of the West Bank in the Six-day war of 1967 Israel has considered Jerusalem to be indivisibke. However, much of the rest of the world consider the city to be still divided, with East Jerusalem being considered Palestinian

A number of Palestinian groups wrote an open letter last week demanding that RCS Sport remove the start from Israel,

The letter said: “The Giro d’Italia deceptively portrays occupied East Jerusalem as part of Israel and as its unified capital. No country in the world recognises any part of Jerusalem as Israel’s capital.”

So, inclusion of the phrase "West Jerusalem" angered many Israelis.

Israeli culture and sports minister, Miri Regev, issued a joint statement with the tourism minister, Yariv Levin: “In Jerusalem, Israel’s capital, there is no east or west.

“There is one unified Jerusalem,” continued the ministers who went on to claim that use of the disputed term was “a breach of the agreements with the Israeli government.”

The ministers added: “If the wording does not change, the Israeli government will not be a partner in the event."