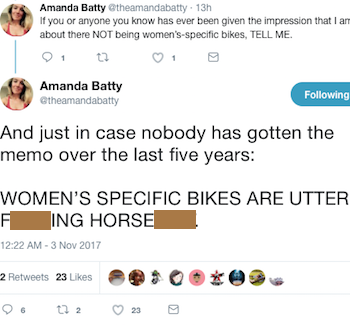 “Women’s specific design” is quietly being shelved by bike makers

Pro MTBer Amanda Batty doesn’t pull any punches – she believes "women’s specific design" is tantamount to snake oil. Many others disagree, claiming that offering bicycles, and cycle products, specifically designed for women has brought more women into cycling. Marketing departments in some bike companies have been split down gender lines, and Giant brought out a women’s specific brand, Liv. Other companies – such as Pivot – produced bikes in smaller sizes (down to 4 feet 11) and didn’t state the smallest bikes were for women.

There are signs that it’s the Pivot approach that could start to dominate, with Specialized just one of the companies to quietly roll back the WSD sizing and rhetoric.

The "women’s specific design" concept was popularised by Trek. The US company trademarked Women’s Specific Design (WSD) in 1999.

Other bike companies followed suit, some using sizing models such as CDC Anthropometric Reference Data for Children and Adults: United States, 2007–2010, and from global body-index data such as PeopleSize Software.

Framebuilder and BikeBiz columnist Liz Colebrook has said that "everyone needs a bicycle that fits well."

She added: "For about 5 or 6 sizes of ‘woman’, the woman specific bicycles big companies like Trek, Specialized and Giant have produced will make a positive difference. But it’s important to remember we are all different and our bodies change over time and sadly the majority of bicycle shops are not fully versed in dealing with those women (and men) who don’t neatly fit off-the-peg sizing. My colleagues in the trade who ask, listen and adapt a bicycle to suit the ‘outliers’ among us will reap the rewards in more ways than one."

"In my anecdotal experience as a framebuilder, I have found that there is no stereotypical women’s body geometry. Over 35 years of designing and building custom frames, I have built many bikes for women with long legs and short torsos relative to their height (which is often what you hear in the bike industry that defines women’s body dimensions), but I have also built many bikes for women with short legs and long torsos relative to their height. Furthermore, I have built a lot of bikes for Japanese women, and every single one of them was 5’1” or less and had shorter legs and a longer torso than most men and other women of similar height I’ve built bikes for. This is enough for me to believe that it also had to do with geographic heritage, and hence knowing where your customers, or their ancestors, came from.

"Based on my limited snapshot of women’s overall body measurements, I certainly do not have sufficient data to make a blanket statement about women’s body dimensions as related to bike fit. I’ve built a lot more bikes for men than women, and I also know I don’t have enough data to say something like, “men have short legs and long torsos,” or, “men have long arms and long legs,” etc.; it obviously would not hold true across the board or even close to it. Since we all know innumerable men and women with short legs and long torsos and well as ones with long legs and short torsos, and any number of other variations in body dimensions, I think we can all agree that it is a hard thing to draw a firm conclusion about how to fit most women on bikes, and that it is a certainty that there will never be a fit formula that works for all women (or men)."

Those companies that offer WSD, or their non-trademarked variants, have long said the concept was based on hard data, especially from "bike fits".

When recrunching the data, Specialized found no correlation between gender and limb length. Specialized’s Stephanie Kaplan told VeloNews: “What we were doing before (in bike designs for women) was right based on the information we had before. But [after discovering that their fit data doesn’t support different frame geometry for men and women] I’m not going to lie about it so we have a great marketing story.”

Going forward it’s likely that companies will focus on how a bike is to be ridden, rather than the sex of who will be riding it.

(That’s for the frame shape, that is. Women-specific saddles won’t be disappearing.)

"Selling bikes to women doesn’t have to enforce archaic beliefs that women and girls are physically anomalous to the general population. We aren’t," writes Batty.

"Women make up 51 percent of the globe’s human populace. Our bodies, in all of their shapes, sizes, differences and wonderfully unique, are normal. We are all normal. We’re just as normal as men and just as common. We aren’t magical unicorns who need specific and particularly complicated marketing to ensnare our dollars. What we need and what we want is what most humans want: to find things that fit us."

Share
Previous BikeBiz top five jobs of the week
Next If you’re not 3.5% down you’re bucking the trend, Trek CEO tells IBDs