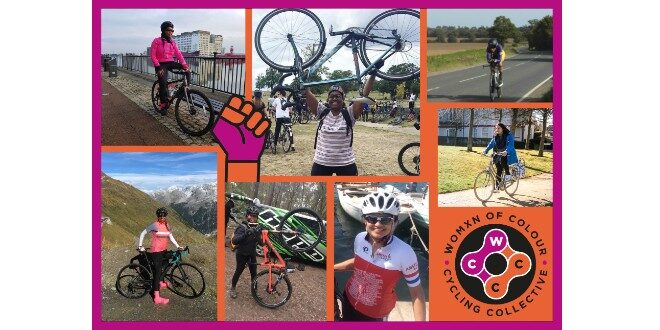 The newly elected chair of the board, Jenni Gwiazdowski, first founded the informal group with Jools Walker in 2018. Initial meetups were grassroots social evenings at Look Mum No Hands cycling cafe in London, but the gathering soon developed into a passionate collective with a mission to make cycling a welcoming activity for everyone across the UK.

During lockdown, the group shifted to online meetings, and with the Black Lives Matter movement galvanising support, those attending wanted to do more than just discuss the issues. Numbers increased and the group decided to create a charity to tackle inequality in cycling.

“Our mission is to inspire, empower, and motivate women of colour to cycle – whether you’re new to riding a bike, or you’re a seasoned veteran, we welcome women and non-binary folks to join us,” said Gwiazdowski. “Our collective addresses the loneliness and isolation of being a minority by creating a safe space for people to be seen, support each other and grow.

“We are challenging the stereotype of what a cyclist looks like. We’re here to celebrate the joy that cycling brings us.”

Alison Wood founded Veloqi Cycle Performance Coaching in 2019 after completing a degree in cycling performance. Since teaching herself how to ride a bike at the age of 39, she joined a local cycling club, discovering a love for competitive cycling and touring. She has since won various club and county trophies and medals. Wood is also a qualified British Cycling skills coach and over the last seven years has run sessions for a wide variety of groups including her cycling club, beginners, women of colour, those who are disabled and youth autism clubs.

Dionne Farley has had a bike for as long as she could walk, but over the last few years has become more interested in cycling for fitness and commuting. In her day-to-day work, Farley can be seen riding stylishly in work clothes, flat shoes, and a leather rucksack as she makes home visits to families. Farley is a champion for women of colour especially ‘women with an illness’, she invites all women to get on their bikes, and ride no matter the distance in order to increase their endorphins, respiration, mental and physical health. Farley is the founder of Space for Cake London.

Jenni Gwiazdowski is the founder and director of the London Bike Kitchen, specialising in bike maintenance for the masses since 2012. Prior to COVID-19, she taught classes and hosted drop-in workshops, as well as LBK’s Women and Gender-variant nights. During COVID, she has taken to teaching maintenance online. Gwiazdowski has also published the book, “How to Build a Bike”, and is one half of the Wheel Suckers Podcast.

Jo Chattoo has been cycling in London for 15 years and working in the sustainable transport sector for around half of that time. While cycling has boomed over the years, Chattoo has noticed that the diversity of people that cycle has not increased at the same pace. Chattoo is passionate about equal access to physical activity and is determined to do something about this. Chattoo works in behaviour change for the walking and cycling charity Sustrans, and is passionate about active travel, community-led development and how the built environment can be used as a vehicle for social change.

Sara Nanayakkara has been cycling for over 40 years. She has taken up road cycling as a sport in 2015 having come from a rowing background. Her biggest cycling achievements are conquering Stelvio Pass, Sa Calobra and Dunwich Dynamo. Nanayakkara is the director of Nth Level Consulting Ltd with 27 years experience of coaching and facilitating. She is trained by Dr Brené Brown, delivering her courage-building Dare to Lead programme and working with organisations in leadership, diversity, equity, inclusion and belonging.

Sidrah Shafaq is a keen cyclist who grew up using cycling as a way to explore her surroundings. This need to explore has only grown and now she bases holidays around cycling and spends weekends exploring on two wheels, challenging herself with what she believes she can achieve. Thanks to the support of women cyclists Shafaq’s confidence and enjoyment of cycling has grown and now she wants to encourage as many women as possible to ride. She wants to try and help remove the barriers that people may feel are stopping them and is a firm believer that if she can do it, anyone can.

Victoria Hazael is a former BBC broadcast journalist, who has spent the last decade working for Cycling UK. She is the creator of the 100 Women in Cycling list which started in 2017 to highlight inspirational women whose achievements are often overlooked. Victoria cycles to get around and as much as possible with her primary school-aged children. She is passionate that cycling isn’t just for sporty types who look good in lycra and want to go fast, she believes that everyone of all abilities can do it.

Currently, the collective has over 100 members across the UK and is growing rapidly by word of mouth. During the pandemic, WCCC is holding online training sessions and advice events on Monday evenings. It has an active WhatsApp support group, and a strong following on Facebook, Twitter and Instagram.

Women of Colour in Cycling Collective has already gained funding from Walking and Cycling Grants London for its first project. The charity is actively seeking cycling brands and organisations who would like to fund their work, projects, and offer training to the collective.