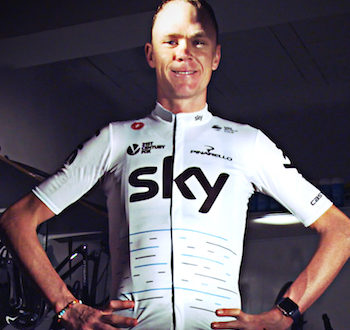 Team Sky riders will be wearing a white jersey at this year’s Tour de France, the opposite to the team’s usual black.

The new design has been produced in partnership with Castelli and will be available in replica versions.

“One of the designs we looked at for the 2017 season was a white version of what eventually became the 2017 Team Sky kit. We all knew that we wanted to use the new design, and the Tour is the perfect opportunity to do that. The kit looks so modern, and yet classic at the same time."

“Castelli looked at different colours during the design process last year. We all loved the white. We are always up for doing things differently and decided the best time to unveil it would be at the Tour."

As a promotion some fans will have the chance to see their name featured on the jerseys worn by Team Sky at the Tour de France team presentation in Dusseldorf on Thursday 29th June.