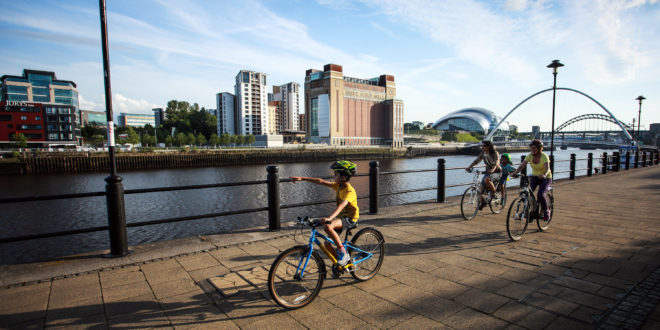 What do you want from us, Newcastle business leaders ask Sustrans at cycle infra event

Newcastle Central’s MP, business leaders, council officials and more were at a launch event for the Newcastle’s Bike Life report, an annual audit of the city’s cycle-friendliness.

The report, which was published in November last year by Sustrans and Newcastle City Council and is part of the UK’s biggest assessment of cycling in cities, showed that 52 percent of people would like to start cycling or could cycle more, but many were put off by poor safety on the roads and a lack of bike lanes separate from traffic.

A number of city-based Bike Life reports were published at the time but a launch event for Newcastle’s was delayed until today.

In a breakfast event this morning at Newcastle’s Civic Centre, Sustrans’ director for the North of England Rosslyn Colderley shared some new calculations done by the charity. These assessed the impact on health, air quality and the economy in Newcastle if everyone who said they would like to start cycling did so (and followed the same pattern in participation already shown by the Bike Life study of existing bike riders in Newcastle).

Overall there would be a saving of £1.7 million a year for the NHS, equivalent to the salaries of 73 nurses. There would also be an economic benefit of £69 million a year, and improvements to air quality by cutting 18,642kg of Nitrogen Oxides and 2,045kg of particulates per year.

Newcastle City Council’s cabinet member for transport and air quality Cllr Arlene Ainsley  kicked off the meeting by saying that having "air quality" in her job title showed that the council took issue seriously, and that cycling was a key way of reducing Newcastle’s emissions.

“The findings of the Bike Life 2017 report show that there is a clear demand for better and safer cycling routes in our city and that this would encourage more people to get out on their bikes," she said.

“This would have a significant impact on the city’s health and economy by reducing car journeys, cutting congestion and pollution, increasing physical activity and delivering savings to businesses through increased efficiency and shorter journey times.

“We have already achieved some significant improvements in cycling infrastructure in Newcastle, in both the city centre and in our communities.

“We know that there is still a lot of work to do to develop and extend safe, segregated cycling routes and we will continue, funding permitting, to carry out works to ensure that more people can have the opportunity and confidence to cycle.”

Colderley said: “Bike Life 2017 found that 52 percent of people interviewed in Newcastle want to start cycling or cycle more, but most were put off by poor safety on the roads and lack of quality cycle infrastructure. This latest analysis clearly demonstrates the value to peoples’ health and the local economy if some or all of those people started travelling by bicycle. Now we need to focus on making our roads safer, more convenient and attractive to cycle, so people feel free to choose active travel.”

Bike Life revealed three out of four people in Newcastle want more protected bike routes to make cycling safer, even when this could mean less space for other road traffic. Only 40 percent of people think safety is good for cycling in Newcastle, while this drops to 29 percent for children cycling.

The report revealed that out of the 1,100 people randomly surveyed throughout the city region, nearly two-thirds – 65 percent – said more cycling would make their city a better place to live and work. Most residents interviewed thought that more space for cycling and walking or buses, as opposed to more space for cars, was the best way to keep their city moving, improve people’s health or air quality.

Even people who said they never ride a bike still overwhelmingly supported the provision of segregated routes  – 69 percent – despite the fact it could mean less space for other road traffic. Bike Life 2017 calculated there were 9 million trips each year made by bicycle in Newcastle and this could rise to 24 million if everyone who says they want to start cycling or cycle more got on a bike.

Stephen Patterson, director of communications for NE1, the Business Improvement District company for Newcastle city centre, asked Colderley what Sustrans wanted from the business community. She said more physical infrastructure was key, but also that it would be extremely helpful for his organisation to promote cycling’s many positives to city centre businesses.

Newcastle was one of seven Bike Life reports for UK cities, which overwhelmingly indicate the demand for protected bike routes to make cycling safer. Out of 7,700 people surveyed in Belfast, Birmingham, Bristol, Cardiff, Edinburgh, Greater Manchester and Newcastle 78 percent of respondents said they wanted more segregated routes for cycling, even when this means less space for road traffic.

The Bike Life reports are inspired by the Copenhagen Bicycle Account, and are the UK’s second biennial reports to measure development in cycling, identify challenges and inform planning.

One of the case studies in the Newcastle Bike Life featured hardware store owner Steve Robson, who was once bitterly opposed to people-friendly improvements planned for the street outside his shop. He helped to raise a petition against the scheme, attended meetings to express his opposition and was in the local newspaper claiming the plans to remove parking places would be "devastating for businesses".

He is now a poster-child for "bikenomics", the theory that making towns and cities more cycle-friendly is good for the local and national economies. He starred in a Sustrans video promoting the Bike Life report.

In 2014, Newcastle City Council revealed plans to spend £350,000 of a £10.6m Cycle City Ambition grant from the national government on reducing car access to Acorn Road in Jesmond, an affluent Newcastle suburb. The plans – which included wider pavements for pedestrians and a contraflow for cyclists – were met with bitter local opposition.

Robson, owner of Acorn Hardware, was one of the leaders of the opposition. “We do not mind change to bring the area into the 21st century, but we don’t want to lose any of our parking spaces," he told a local newspaper at the time.

“If that happened it would be devastating for businesses and put a big strain on shops. If people can’t park it will put people off – simple as that."

Along with another business owner on the street he created a high-profile campaign to oppose the council’s plans. The pair placed unmissable full-length posters in a vacant corner shop urging passers-by to “Save our parking – say no to council plans”.

The opposition led to a watering down of the council’s original plans, but a number of improvements were later carried out including making the street one-way for cars, but allowing cyclists two-way access. A cycle-specific traffic light was also installed and cycle parking stands added.

Robson now supports the changes he once bitterly opposed. In the Sustrans-produced video he said:

"Two years ago the council decided to change the road from a two-way to a one-way system with the loss of up to 20 car parking spaces. As an independent retailer I wasn’t too happy with this.

"However, since the changes have been made Acorn Road has become more vibrant with the increase in pedestrians and cyclists. Now with more bike racks we get more cyclists coming into the store."