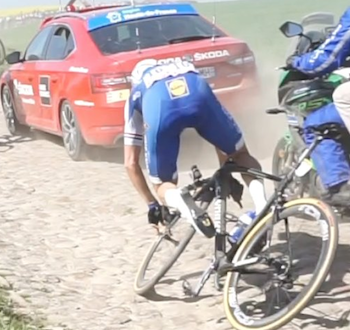 We screwed up, says Specialized over steerer tube race crash

Specialized’s global head of marketing has assumed responsibility regarding the Paris-Roubaix crash of Niki Terpstra of the Specialized-riding Quick-Step Floors team.

“We really did our best to go above and beyond,” said Mark Cote.

Cote was explaining the train of events that led to a mechanical failure on Terpstra’s bike causing him to fall and abandon this year’s edition of the bike- and rider-punishing event. Terpstra won the race in 2014 and was charged with sheparding race favourite Tom Boonen. The crash was caused by a steerer tube breaking on the Maing à Monchaux-sur-Écaillon sector of setts.

Cote told James Huang of CyclingTips that the crash was due to mechanics not switching over to the correct steerer tube on Terpstra’s bike. Unlike the rest of the team Terpstra wanted to ride on a non-suspended bike.

Specialized had provided the team with an aluminium plug to take the place of the standard Future Shock cartridge. According to Cote, that part wasn’t meant to be ridden in a punishing race such as Paris-Roubaix.

“The first sample would have likely been fine under [regular] on-road conditions,” Cote told CyclingTips, “but it was a quick prototype to see how the bike felt.”

Terpstra liked the prototype, and then Specialized’s engineers carried out a finite element analysis to develop a strengthened part that would be designed to survive bumping over the Paris-Roubaix setts.

“It was the same materials in both: 7075-T6 aluminum,” Cote told CyclingTips. “But the product that was re-engineered had tube walls that were over 2mm thicker in the area with the highest stress, where the actual failure occurred.”

This new, improved part was not fitted to Terpstra’s bike.

"Ultimately, due to poor communication, we just screwed up,” said Cote.