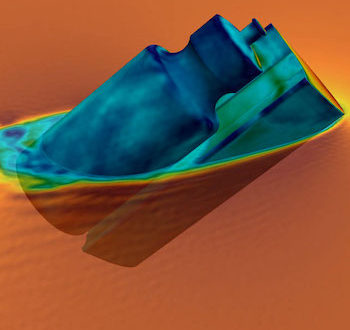 Aerodynamics specialist Victor Major of Velocite has been granted a patent for a concave bicycle downtube designed to enable the bicycle to remain aerodynamic even when a water bottle is present. Major was formerly of Taiwan but is now based in the Flanders Bike Valley complex in Belgium, which has a wind tunnel alongside other bike companies and a retail store.

"I was awarded a full invention patent," said Major. "This is valid for 20 years."

He told BikeBiz: "With my design the standard round water bottle is fully integrated into the airflow around the downtube in such a way that the air flows around the water bottle undisturbed.

"I designed this downtube due to the increasing awareness among bike riders, and the manufacturers who were making bikes in the emerging aero road bike market that water bottles have a measurable impact on bicycle aerodynamics.

"The Giant Propel generated a lot of buzz in the market and a lot of emphasis was placed on the widening of the down tube at the location of the bottle cage mount which was claimed to maintain the aerodynamics of the bicycle after the bottle was installed. I considered the Propel and all the other options that were in the market – including the aero frames with flattened down tube with claimed better water bottle integration – and sought to understand how they may deliver on their promises.

"I conducted extensive simulations using our custom written CFD software to see how the airflow behaves when it traverses the downtubes and encounters a water bottle. The end result was that I could not see any significant improvements to aerodynamics with any of the designs in the market.

"The problems were both with the length of the flattened section which was either too short to shield the entire bottle, and with the shapes of the various downtubes which failed to guide the airflow over the water bottle. I was inspired to design a downtube that integrates the standard round water bottle into the bicycle airflow.

"The currently popular “U” shaped down tubes do not function well at low yaw angles, and do not form an effective airfoil once the water bottle is added.

"The final element of the solution was to ensure that the air boundary layer remained attached to the down tube and to the water bottle for as long as possible. The boundary layer is a very thin layer of air that sticks to the surface of all objects in the atmosphere. In simple terms, if the boundary layer separates from the surface of a moving object you end up with turbulence and the aerodynamic drag goes up, way up.

"The preliminary wind tunnel result from a test run performed at the Flanders Bike Valley wind tunnel showed that there is a 12.3 percent reduction in drag when a water bottle is present. This correlates well with our CFD results."

Major said he is open to licensing and other offers from bicycle manufacturers interested in the design.