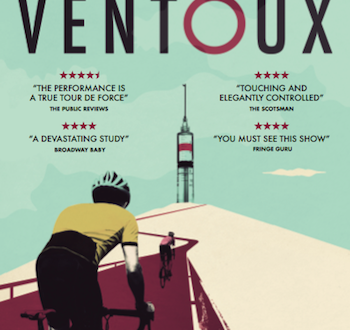 A theatre production about the 2000 Tour de France is to go on national tour. Ventoux was first staged at the Edinburgh Festival Fringe in 2015, and is now going on a thirty-nine venue tour of England.

The one-hour production by 2Magpies Theatre is based on the stage-twelve battle between Lance Armstrong and Marco Pantani, and weaves in their history of doping. Armstrong and Pantani are played by actors riding road bikes on turbo trainers, with a video backdrop of the Ventoux climb shot by the company.

2Magpies Theatre is a Nottingham-based company which explores topical and political issues. It was founded by Tom Barnes and Matt Wilks, who graduated with MAs in International Security and Terrorism. Their previous show, The Litvinenko Project explored the poisoning of the Russian dissident, and their next show, Last Resort about the detention of terror suspects at Guantanamo Bay, will premiere at the Edinburgh Festival Fringe.

Ventoux starts at the VAULT festival in London, 15-19th February, and then tours from 2nd March.