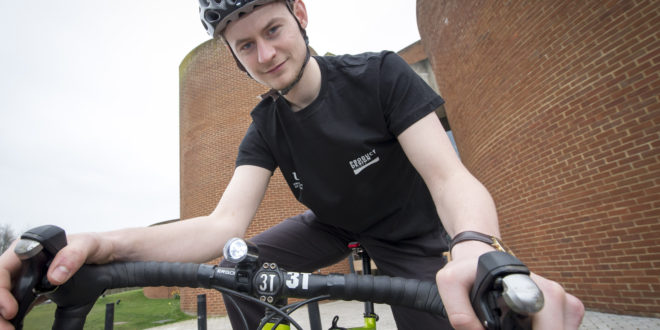 A University of Sussex student has designed an “innovative” new bike light that will help cyclists flag up danger hot spots to local authorities.

Product design student Jake Thompson’s bike light features three buttons which cyclists can use to flag up problems they encounter on their ride such as potholes, close pass points and dangerous junctions.

The reports can then be loaded up onto a map telling local councils where they have the biggest issues and where they should be focusing investment and troubleshooting methods.

The 24-year-old final year student is now hoping for investors to help bring his product, named Flare, to market by further developing the app, website and electronics.

He said: “If you compare the UK to somewhere like Copenhagen, then we are way behind when it comes to cycling infrastructure and participation. The Danes have a website which highlights the most frequented and the most frustrating areas for cyclists which helped inspire the Flare. The benefit of my design is that cyclists can report where they feel the cycling infrastructure is inadequate in real time at the moment they experience it and it allows them to pinpoint the exact black spot.”

Flare, which can be attached to the handlebars of any bicycle, has three buttons to raise specific complaints. Cyclists press one button to highlight issues with the road surface such as a pothole or obstruction like glass in the road; button two to highlight a stretch of road perceived to be dangerous particularly if cyclists felt passing cars were too close to them and button three to report dangerous or confusing junctions.

Once a cyclist has finished their ride, they confirm their ‘Flares’ using their smartphone app where they can add further comments and images. There is also a facility within the design for a cyclist to negotiate the dangerous part of the road first before raising their complaint once through that particular section. The system would then allow the cyclist to pinpoint where the actual black spot is.

The light works by linking via Bluetooth to an app on a mobile phone with every button press plotting a GPS location on the Flare map of hot spots.

Thompson added: “Every cyclist has sections on their ride which they would rather avoid or wished could be designed better. Now with Flare, they have the opportunity to potentially help change their route for the better or at the very least warn their fellow cyclists about the dangers up ahead.”

Flare was presented by Thompson at the Product Design Degree Show being held at the Attenborough Centre for the Creative Arts at the University of Sussex this week.